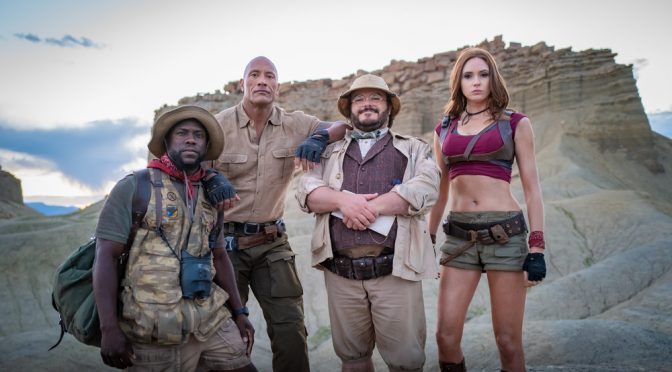 Jumanji: Welcome to the Jungle was such a huge hit that everyone knew there’d be a sequel – and feared that it would be awful (as sequels frequently are).

Instead, writers Jake Kasdan (who also directed), Jeff Pinkner and Scott Rosenberg took the idea and shook it up vigorously.

What you need to know: Jumanji: The Next Level works because not everything is the same this time around.

The holidays are here and the gang from the first film – Spencer (Adam Wolff), Bethany (Madison Iseman), Martha (Morgan Turner) and Fridge (Ser’Darius Blain) – are supposed to be coming back to town getting together for brunch at local eatery Nora’s.

Bethany has been building houses for the poor in Brazil; Martha has just finished a semester at college; and Fridge is playing college football. Only spencer isn’t where he wants to be – having dropped out of school in New York and working in a drug store.

As we see, Spencer arrives home to find his grandfather, Eddie (Danny DeVito) is staying there while recovering from hip replacement surgery – and sharing his room!

That night, Spencer sneaks down to the basement where he has hidden the retrieved Jumanji video game. We all know what’s coming next.

When Spencer doesn’t show for the planned brunch, the gang goes to his house to see what’s going on. They meet Grandpa Eddie and, very shortly thereafter, Eddie’s old friend, Milo (Danny Glover) shows up – not a Good Thing for Grandpa Eddie.

Spencer’s friends head down to the basement and discover the partially repaired game and wind up following Spencer back into the game – inadvertently bringing Grandpa Eddie and Milo along.

Following the well-handled exposition, Kasdan kicks Jumanji: The Next Level up a notch as the five find themselves in a predicament – Spencer is not the Doc Savage-like Dr. Bravestone (Dwayne Johnson); that avatar has been taken by Grandpa Eddie.

Even worse (or better, depending whose point-of-view we’re taking), the game’s Basil Exposition, Nigel (Rhys Darby) arrives and gives the group a much different mission.

Meanwhile, Bethany has been left behind and the only thing she can think to do is call on Alex (Colin Hanks) for help – which leads to a truly peculiar situation later (as does the revelation of Spencer’s new avatar.

Grandpa Eddie discovers that, as Bravestone, his hip is just fun and he can brawl with the best of them – though he is so slow to grasp the concept of actually being inside a video game that he is a hindrance on more than one occasion.

Milo has the same problem – not only does he not get the concept, but his slow speech pattern is no help when his zoological knowledge is needed to avoid danger.

The effect in The Next Level are, indeed, next level – some of the dangers the group faces include dust storms, a hero of stampeding ostriches and climbing an icy mountain (or should I say a mountain of ice, because that’s what it looks like).

In The Next Level, the villain of the piece is Jurgen the Brutal (Rory McCann, Game of Thrones’ Sandor ‘The Hound’ Clegane) – a man so brutal that he kills the man he loves like a brother for an attempted theft, and feeds his remains to his own hyenas!

The absolute action highlight of the film is Ruby Roundhouse with nunchuks – all done by Gillan!

Kasdan does everything he can to make the expository sequences entertaining (and his cast certainly seems to be enjoying their part in the process), but the film takes off when things move to Jumanji.

The action is at least as good as the first film and avatar cast carry the essences of the real characters very well (though Kevin Hart’s Milo is the best of the bunch).

Kudos to Awkwafina for pulling off a very cool new role and to DeVito and Glover for giving the film a little extra warmth and gravitas (while being funny as hell).

Jumanji: The Next Level is so close to equaling its predecessor that it is a must for fans of Welcome to the Jungle.