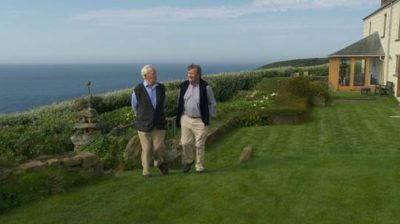 He’s written some of the most acclaimed spy thrillers ever written and, 86-years old, he’s not done yet.

John Le Carré has a lively conversation with Steve Kroft for this week’s 60 Minutes.

Among his revelations: he was an agent in Britain’s famed MI6; and finishing a novel puts him into a depression – but he already has an idea for his next book!

But Not for Long – The 86-Year-Old Bestselling Author Says

He Already Has an Idea for his Next Spy Thriller

World-famous author John le Carré goes into a depression when he finishes one of his bestselling spy thrillers – that’s where he finds himself now, on the publication of his 24th novel. But le Carré tells Steve Kroft in a rare television interview that there is light at the end of the tunnel. The 86-year-old ex-spy has another idea for a new book, and he can’t wait to get to work. The interview will be broadcast on 60 MINUTES Sunday, Sept. 17 (7:00-8:00 PM, ET/PT) on the CBS Television Network.

Le Carré, whose real name is David Cornwell, says the end of a book is the beginning of the most depressing times in his life. “It’s a feeling of—you’ve depleted everything you’ve been working on,” says Cornwell. “The depression that overtakes me when I’ve turned in a book, I must confess is real and deep.” Watch the excerpt.

A Legacy of Spies, his 24th novel, brings back the world-weary George Smiley, his most famous character, after almost 30 years. Cornwell identifies with Smiley, describing him as “my secret sharer.” He says, in the course of his espionage work, Smiley does things he may find distasteful, but he recognizes he has a duty.

Cornwell was himself an agent in Britain’s famed M16 during the height of the Cold War and wrote one of his most successful books, The Spy Who Came in from the Cold, while still undercover. The novel was such a hit, Cornwell’s other life as an intelligence officer was quickly blown and he had to give up spying. That book and many of his others have been made into television series and films.

Kroft visited Cornwell at his ocean-side redoubt on the cliffs of Southwestern England. The author, who also wrote Tinker Tailor Soldier Spy and The Little Drummer Girl, is candid with Kroft about the life, work and a writing process that has made him one of the most successful authors of the past 60 years.

Cornwell should start feeling more cheerful soon. He tells Kroft, “Out of the ashes of the last book, so to speak, comes the phoenix of the new one, and then life’s okay again… Each book feels like my last book. And then I think, like a dedicated alcoholic, that one more won’t do me any harm.”

Asked if he had another idea for a book, he responds quickly, “Absolutely. I can’t wait to get to it.”