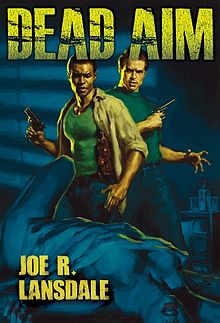 SundanceTV continues to expand into scripted television by greenlighting a new mystery series, Hap and Leonard – based on Joe R. Lansdale’s bestselling series of books.

The series will feature the titular pair of best friends – Hap Collins and Leonard Pine – and martial artists who struggle to stay on the right side of the law through a series misadventures. Lansdale’s books fall into the Southern noir genre and promise to be good, pulpy fun.

Hap and Leonard join SundanceTV’s growing roster of critically acclaimed shows that include Rectify, The Red Road, The Honourable Woman and Top of the Lake. Production will begin in 2015 for an early 2016 premiere. For more, follow the jump.

New York, NY – November 10, 2014 – SundanceTV announced today the greenlight of its next wholly owned original series “Hap and Leonard.” The project is based on the rollicking Joe Lansdale Southern noir book series about an unlikely pair of best friends and martial arts experts who struggle through misadventure, to stay on the right side of the law in1980’s East Texas. The series has been greenlit for six one-hour episodes. It will begin shooting in 2015 and will air in early 2016.

Sarah Barnett, SundanceTV President, commented, “Equal parts shocking and hilarious, ‘Hap and Leonard’ will cut through in a crowded TV landscape as irresistible southern pulp noir.   Jim Mickle and Nick Damici have a delightfully fresh approach to storytelling, creating vivid characters set in a picaresque world of deep friendship and occasional blood curdling incident.”  She continued, “What’s more, Jim and Nick are true Sundance voices, having made a splash in recent years at Sundance Film Festival with their feature film.   We couldn’t be happier to add ‘Hap and Leonard’ to our line up of daring scripted shows.”

Produced by Sundance Studios, the series is created by director/writer Jim Mickle and writer Nick Damici, who partnered on the film adaptation of Lansdale’s “Cold in July” with Michael C. Hall and Sam Shepard.  They have adapted the novels, novellas and short stories about white, working-class Hap Collins and black, gay Leonard Pine. Mickle will also direct.  The project is executive produced by Nick Shumaker and Jeremy Platt, along with co-executive producers Joe Lansdale and Lowell Northrop and consulting producer Linda Moran.

Hap Collins is a white working class laborer who spent time in federal prison as a young man for refusing to be drafted into the military and serve in the Vietnam War. Now In his late thirties, he is just barely making ends meet picking roses on an East Texas plantation.  His colleague and lifelong best friend is Leonard Pine, a six-foot five, gay, black Vietnam vet with anger issues. Leonard was raised by his uncle who shunned him after learning he was gay leaving Hap as his only support in the not so progressive rural South. By turns funny and shocking, “Hap and Leonard” provides an unpredictable and side-eyed look into race, class and friendship.

Today’s news underscores SundanceTV’s commitment to producing original and distinctive scripted programming. The network has established itself as a home to auteur-driven narrative content with programs such as “Rectify,” “The Red Road,” “The Honorable Woman,” and “Top of the Lake.” SundanceTV is preparing for the premiere of its next original mini-series “One Child” starring Katie Leung, Elizabeth Perkins and Donald Sumpter, which will premiere on December 5th, and “Babylon,” an original series from Danny Boyle which will premiere in 2015.

SundanceTV is making and celebrating television as distinctive as the best independent films. Working with today’s most remarkable talent, SundanceTV is attracting viewer and critical acclaim for its original scripted and unscripted series. Launched in 1996 and owned and operated by AMC Networks Inc., SundanceTV delivers on the spirit of founder Robert Redford’s mission to celebrate creativity.  www.sundance.tv