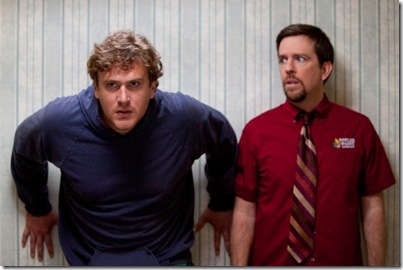 Jeff [Jason Segal] is a thirty-something stoner who lives in his mom’s basement, smokes a lot of pot and watches M. Night Shyamalan’s Signs over and over hoping to find some indication of his destiny. His mother, Sharon, Susan Sarandon, is a cubicle drone who sets Jeff a simple task while dealing with a secret admirer. His brother, Pat [Ed Helms], is in an increasingly uncommunicative marriage [mostly his fault] to the lovely, but rapidly reaching critical mass Linda [Judy Greer].

A wrong number – for someone named Kevin – combined with his mom’s strongly put request to go to Home Depot and get some wood glue for a simple repair, sets Jeff off an adventure, while Pat’s brushing off of his wife’s desire to buy a house by buying a Porsche Boxster is the final straw for Linda. At work, Sharon shares her discovery of having a secret admirer with Carol [Rae Dawn Chong], the only person she’s ever gotten to know at work. 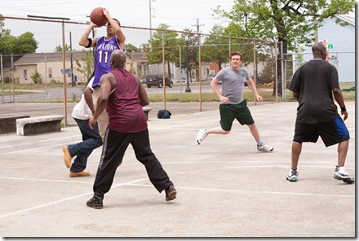 The name Kevin leads Jeff to get off the bus to follow a kid in a basketball uniform that says Kevin on the back – and a game of pickup basketball, a mugging, and a hitched ride delivery truck. It’s a scattershot journey that wends its way into Pat’s path – and the discovery that Linda might be having an affair.

Jeff, Who Lives At Home is a kind of comedy – not the onslaught of gut-busting laughter kind [though there are some glorious laughs, but more the smile at the recognition of fellow human beings who are just as capable of awkward moments as we are kind.

The Duplass Brothers has fashioned a short, gentle, human comedy that affords moments of drama [Ed Helms shines as Pat tries to figure out what’s gone wrong in his marriage] and romance [Sharon’s secret admirer actually gets her!] to fold fluidly into Jeff’s search for his destiny.

This is a film that doesn’t, quite, seem to make sense until we reach the end and all the pieces fall into place – and destiny doesn’t necessarily have to be capitalized. Jeff, Who Lives At Home is a film of small moments that ring true – even with the oddly appropriate deus ex machina that leads to its conclusion [in a quest for destiny, it just works, here].

At a brief eighty-three minutes, Jeff, Who Lives At Home is more movie that many two-and-a-half hour behemoths – and more entertaining on genuinely human level.