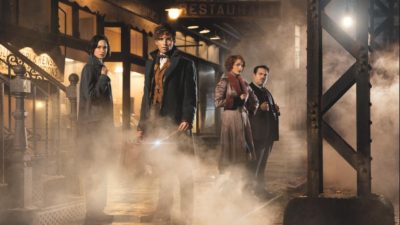 Fantastic Beasts and Where to Find Them is a textbook for first year students at Hogwarts. Written by Newt Scamander, it lists a number of fantastical creatures, their habitants, habits and diets – as well as the level of danger posed by each.

Fantastic Beasts and Where to Find Them is also a dazzling new tale from the pen of Ms. Rowling, who wrote the clever, charming and delightful film, centered on the adventures of Scamander in the New York City of the late 1920s.

The film opens with something tearing up a multistoried building and the streets of New York; the arrival of Scamander (Eddie Redmayne, The Theory of Everything) in New York, with a suitcase that seems to be containing something alive, and a rotund gentleman named Jacob Kowalski (Dan Fogler, Secrets and Lies) being refused a loan after an encounter with Newt leaves him with Scamander’s suitcase instead of his sample case.

We see an unusual gentleman in black (Colin Farrell, Seven Psychopaths, True Detective)) surveying the damage from the magical disturbance and Newt accosted by Porpentina ‘Tina’ Goldstein (Katherine Waterston, Boardwalk Empire, Inherent Vice) and taken in to the North American Investigative Branch – where she completely fails to state her case against Scamander’s crime (letting dangerous beasties loose in the city) because neither the head wizard, Seraphina Picquery (Carmen Ejogo, Kidnapped, Sparkle) nor the head of Investigative Branch, Percival Graves (whom we saw earlier) give her a chance to do so. 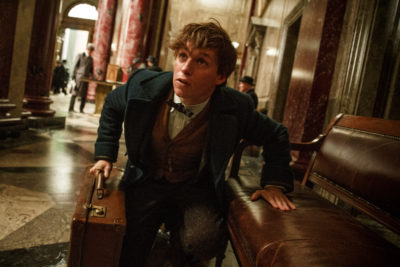 So Newt and Tina seek out Kowalski and set in motion a series of misadventures that bring Tina’s telepathic sister Queenie (Alison Sudol, Transparent, Dig) and the briefly glimpsed Second Salem group – a group of anti-magic fanatics that includes Mary Lou (Samantha Morton, Minority Report, Morvern Callar), a mother with a taste for corporal punishment; Credence (Ezra Miller, The Perks of Being a Wallflower, We Need to Talk About Kevin), a withdrawn young man, and Modesty (Faith Wood-Blagrove), a preteen with a predilection for playing hopscotch with an anti-wizard chant – into the story.

To say much more of plot might provide spoilers but there are some things that can be mentioned: Newt’s suitcase making the TARDIS look cramped for space; a blue, platypus-like creature with a fondness for shiny things; a rhino-like creature that might be looking for a mate and a twig-like creature that has separation anxiety.

For a film with a ton of special effects, Beasts is solidly build on four characters – Redmayne’s Newt is a bit of a naïf/creature whispering savant who sees his creatures’ beauty and not their potential dark sides; Tina is a former auror who lost her job because she attacked Mary Lou after witnessing how she abused her adopted children; Jacob is a laborer who wants to become a baker because he wants to bring people joy, and Queenie is an apparent ditz whose seeming ditziness hides a wounded and sensitive soul who is used to men thinking of her ‘that way’ the first time they see her.

Beasts will likely be my favorite blockbuster of the year because of its main characters and the charming looks at its creatures. Between them they overcome the less than three dimensional villain (whose desire to bend that destructive force I mentioned earlier to his will – and take wizards out of the shadows and into ruling the world), or the equally one dimensional President Picquery, Mary Lou and Modesty. 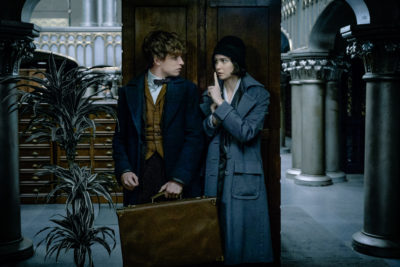 The thing about Beasts is that it is fast-paced fun that holds up emotionally to the point that a simple plot is really all that’s required for us to enjoy the characters it contains.

David Yates, who directed four of the eight Harry Potter movies, knows the world that Rowling has created – where to pin character moments and when to let the CGI explode (and, crucially, when both should overlap).

Special mention should be made of sidekicks Fogler and Sudol – they are more nuanced than the leads and steal the movie. Their relationship adds a bit of sweetness – and a touch of melancholy – to the proceedings.

As a fan of the Harry Potter books and films, I have to say that I enjoyed Fantastic Beasts and Where to Find Them more than most of Harry Potter movies – it may just be as good as Prisoner of Azkaban. It certainly didn’t feel like 133-minute movie.