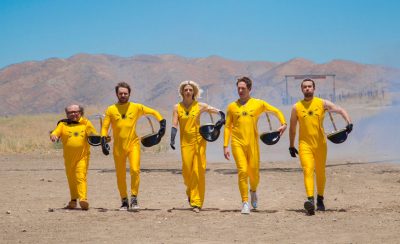 Goes Live on February 15, Viewable On FXNetworks.com and In Full Immersive VR Via The Jaunt VR App

LOS ANGELES, February 15, 2017 –The gang from It’s Always Sunny in Philadelphia is offering fans the ride of their life with a scripted narrative VR experience from a comedy series. “Project Badass,” a four-minute VR episode that goes live February 15, uses never-before-seen footage to take viewers on an ultimate motorcycle stunt.

Viewers can go to www.fxnetworks.com/projectbadass to watch a 360-degree experience of “Project Badass,” as well as learn how to download the Jaunt VR App to watch on every major phone and VR headset, including Oculus, Samsung Gear V and Google cardboard devices.

“Project Badass” premieres on the same day It’s Always Sunny in Philadelphia returns with an all-new episode featuring a hilarious and epic VR storyline: “PTSDee” (Wednesday, February 15 at 10 PM ET/PT on FXX) – After finding out she’s a male stripper’s “rock bottom,” Dee goes on a mission to prove she’s the best thing that ever happened to him. Dennis takes over for the stripper with the help of his bag boy, Charlie. Meanwhile, Mac and Frank get sucked into a VR war game that causes Mac to develop his own case of PTSD. Written by Charlie Day, Glenn Howerton and Rob McElhenney; Directed by Jamie Babbit.

Sunny’s Season 12 is off to a great start as the first five episodes represent the five most-watched original telecasts in FXX history in Adults 18-49 and Total Viewers on a Live+3 basis. So far this season, Sunny is averaging 1.2 million Adults 18-49, a +21% increase over Season 11, and 1.45 million Total Viewers, a +20% increase over the previous season.

Jaunt is pioneering the future of creative storytelling through cinematic virtual reality. Founded in 2013, Jaunt is the leading developer of the hardware, software, tools, and applications to enable cinematic VR and put the power of virtual reality in the hands of today’s best content creators. Jaunt works with leading creatives – from brands to artists to filmmakers – to create cutting-edge content accessible across all devices and platforms.