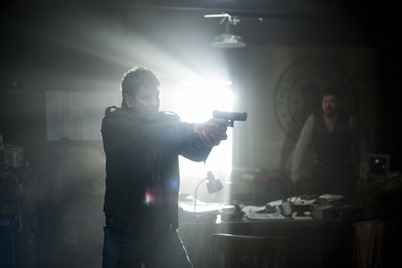 Legends (TNT, Wednesdays, 9/8C) stars Sean Bean as Martin Odum, possibly the best undercover operative the FBI has ever had – though this evaluation comes one FBI psychiatrist where three others have determined he should never be allowed to go into the field again. Problem is, he is this close to finding out who’s the leader of a militant group planning an action that will make 9/11 look like a firecracker.

In tonight’s series premiere, six months of Odum’s work is undone by a raid by the ATF – but there’s a possibility something can salvaged when the group’s Founding Father requests a meeting. Apparently, Odum has escaped with his cover unblown.

After a quick stop at his ex-wife, Sonya’s (Amber Valletta) place to drop off an alimony check, he’s back at work – this time with a support group under the command of Crystal Maguire (Ali Larter), who plans on keeping a tight rein on him. She’d rather he wasn’t there at all, but their boss (Steve Harris) has insisted.

Fairly early on, we get to see that Odum doesn’t always completely disengage from his latest legend (as cover IDs are referred to) – he signs the alimony check with his legend’s name. Later, in a briefing, he reverts to his latest legend’s accent and stutter.

Things get even more confusing when Odum finds himself being followed by a man in hooded jacket – who tells him that Martin Odum doesn’t exist. He’s a legend.

Legends takes a number of familiar elements – undercover work, an ongoing mystery and the question of identity (done with a much lighter touch in The Pretender over a decade ago). What sets Legends from other shows that mine similar territory is its stars.

Bean brings a rough-hewn sincerity to the role and holds the screen well (a Good Thing because he’s onscreen something like 80% of the time). He slips back and forth between Odum and his legend with ease – too much ease, in fact. It’s easy to see why three out of four FBI shrinks want him taken out of the field.

Larter matches Bean’s intensity and gets a few lighter moments that help keep the premiere from sinking under its own weight. Crystal and Odum share a history – including a hook-up that she now refers to as a mistake.

Tina Majorino plays Maggie Harris, the newest member of Crystal’s team: a role that Veronica Mars fans could see as someone her VM character Mac might have become. She’s a computer whiz.

The Legends premiere does a few things extremely well: it effectively builds suspense; it showcases Sean Bean’s talent; it sets up its premise efficiently, and it looks great.

On the other hand, it also has at least one character act out of character (or maybe not – we don’t know these people well enough to be sure, but the situation in question seems diametrically opposed to everything we’ve seen of the character up until that moment). And that leads to another problem – the supporting cast has so little to do that we get barely sketched in characters that have to be carried by the actors’ presence.

Legends is a promising show that needs a bit of fine tuning. As the other cast members get more development – and as Odum wrestles with a huge identity crisis – I expect it will find the balance it needs to keep its audience engaged.

Photo by Richard Foreman/Courtesy of TNT