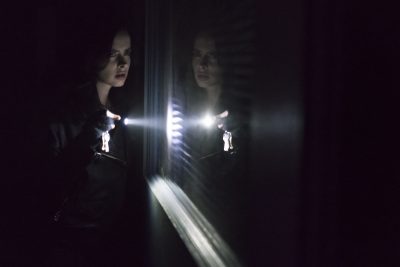 ‘What are you? How did you end up like this? Are you going to kill me?’ Jessica Jones reiterates questions she’s most asked in a flat, disinterested voice.

This new behind-the-scenes look at Marvel’s Jessica Jones: Season Two explores the characters – their growth/lack of same, and their attempts to find their place in the world – not in terms of superherodom, but as people.

Go behind the scenes of Marvel’s Jessica Jones with stars Krysten Ritter, Carrie-Anne Moss, Rachael Taylor, Eka Darville, and showrunner Melissa Rosenberg in this action-packed preview of the long-awaited second season. There’s more to Jessica’s story, and it takes a talented group of women on- and off-camera to do it justice.

About Marvel’s Jessica Jones:
New York City private investigator Jessica Jones (Krysten Ritter) is beginning to put her life back together after taking down her tormenter, Kilgrave. Now known throughout the city as a super-powered killer, a new case makes her reluctantly confront who she really is while digging deeper into her past to explore the reasons why.