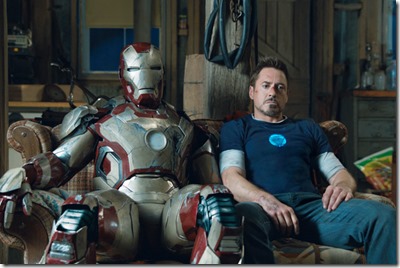 Marvel Studios continues to create ambitious, successful superhero movies with Iron Man 3 – the best of Tony Stark’s solo adventures to date. This time out, Stark is suffering post-traumatic stress disorder as a result of having his world upended in The Avengers – leaving him vulnerable both physically and emotionally.

While Iron Man 3 isn’t (quite) the movie that The Avengers was, it is an outstanding superhero movie that develops aspects of Tony Stark/Iron Man (Robert Downey Jr.) in very human ways – thus anchoring the superhero exploits to a very relatable human being.

Stark is having trouble sleeping in the aftermath of The Avengers – now that he’s home again the whole experience has put him into a funk. Aliens, gods and weird dimensions have undermined his world and even being lucky enough to have had Pepper Potts (Gwyneth Paltrow) move in with him hasn’t really helped much – when she heads off to bed, he goes into his lab and tinkers. As IM3 begins, he hasn’t slept in three days.

Elsewhere, a new, tech savvy terrorist who calls himself The Mandarin (Ben Kingsley) is blowing stuff up – killing dozens of innocents as he ‘teaches’ U.S. President Ellis lessons (lesson one: heroes – there is no such thing). Kingsley’s Mandarin dresses like an Asian, carries a Russian weapon and speaks in a broad Middle-American accent with flattened volumes and unorthodox phrasing – making it difficult to say exactly where he’s from. 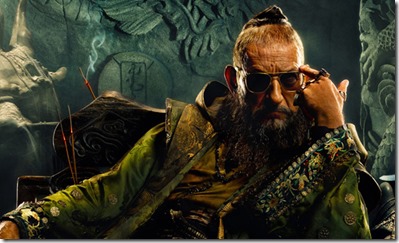 Then there’s Aldridge Killian (Guy Pearce), a seemingly suave genius and founder of Advanced Idea Mechanics (along with Hydra, one of Marvel comics’ most vicious and effective criminal organizations) who seems sweet on Pepper and has a serious grudge against Tony that stems from being shot down by Stark one New Year’s Eve fifteen years before.

Add gorgeous scientist Maya Hansen (Rebecca Hall) – who was the reason Stark ignored Killian all those years ago – and her Extremis program for creating supersoldiers and you have the basics of a terrific superhero/action movie.

But Iron Man 3 doesn’t stop there –director/co-writer Shane Black (Lethal Weapon, Kiss Kiss Bang Bang) not only has Tony suffering anxiety attacks, he destroys Tony’s toys – the price of giving a terrorist one’s home address. Then he strands him in a snowy part of Tennessee (this is a summer movie that takes place at Christmas). Without his toys, but with a precocious (but not annoyingly cute) boy named Harley (Ty Simpkins) – whom he doesn’t treat much better than anyone else. Harley, though, gives as good as he gets.

Jon Favreau is back as Tony’s best friend, Happy Hogan – now head of security at Stark Industries. In his brief time onscreen, Happy takes a lot of damage but also provides a clue that sets Stark on the path to take out the Mandarin. 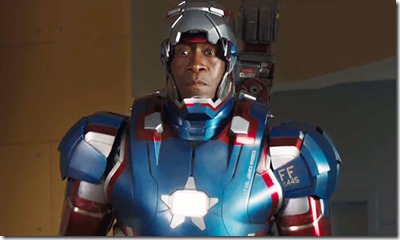 Downey has really gotten into the role of tony Stark and infused him with Downey’s own gift of glib throwaway banter and cocky nonchalance – which is why his portrayal of works so well. Superficially, Tony is the same, but Downey gets his pain and keeps it just simmering beneath the surface – when it doesn’t surface in the form of anxiety attacks.

Kingsley has a field day as The Mandarin – and certainly makes the most of a particularly effective twist involving the character. Pearce plays Killian as gifted but kind of forgettable – which plays into a cool twist for his character. In fact, almost every major character undergoes some kind of transformation over the course of the movie.

Black gives Iron Man 3 the same kind just slightly off-kilter feel that made Kiss Kiss Bang Bang – his first film as director – such a peculiar delight. That he is able to do so should be no surprise. Marvel has made a habit of signing unlikely directors to make their movies – something that has, no doubt, been able to keep them from feeling like they’ve just rolled off some gigantic assembly line.

Iron Man is one of the very best superhero movies ever made. It is one of the few threequels to not just work really well, but outdo both its previous films, quality-wise (the only other film I’ve seen do that would be Toy Story 3). Even the 3D conversion is pretty darned good – it even works during the final action sequence, when the lighting occasionally gets a bit murky.

As for the tag at the end of the closing credits, it may be the best, yet – and here’s a hint: Tony Stark narrates Iron Man 3, and there’s a reason for that. Man of Steel will have to pretty awesome to top Iron Man 3.