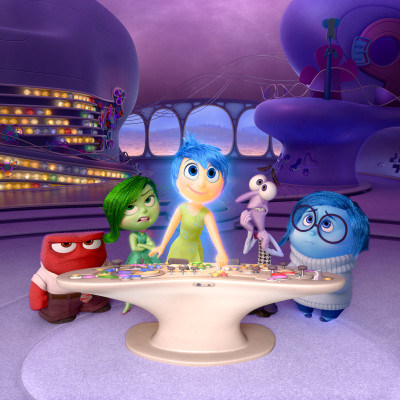 Disney•Pixar’s “Inside Out” takes us to the most extraordinary location yet – inside the mind of Riley. Like all of us, Riley is guided by her emotions – Anger (voiced by Lewis Black), Disgust (voiced by Mindy Kaling), Joy (voiced by Amy Poehler), Fear (voiced by Bill Hader) and Sadness (voiced by Phyllis Smith). The emotions live in Headquarters, the control center inside Riley’s mind, where they help advise her through everyday life. Directed by Pete Docter and produced by Jonas Rivera, “Inside Out” is in theaters June 19, 2015.

Riley – whose happy life in Minnesota is upended when her father takes a job in San Francisco. Suddenly she’s gone from a lovely home with a yard to a dingy house on a hill (on a back street!); from having lots of friends to being the new kid in school; from being a key member of her hockey team to being, well, something else – is depressed. 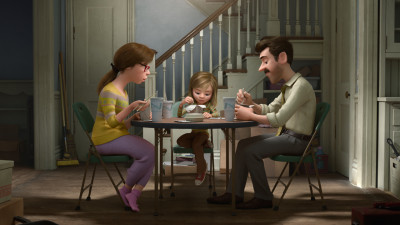 WHAT ARE THEY THINKING? — Pixar Animation Studios takes audiences inside the mind of 11-year-old Riley, who is uprooted from her Midwest life when her father starts a new job in San Francisco. Guided by her five Emotions – Joy (voice of Amy Poehler), Sadness (voice of Phyllis Smith), Fear (voice of Bill Hader), Disgust (voice of Mindy Kaling) and Anger (voice of Lewis Black) – Riley struggles to adjust, and when Fear, Disgust and Anger are left in control, even a simple family dinner takes an unexpected turn. Also featuring the voices of Diane Lane as Mom, Kaitlyn Dias as Riley and Kyle MacLachlan as Dad, Disney•Pixar’s “Inside Out” opens in theaters nationwide June 19, 2015. ©2014 Disney•Pixar. All Rights Reserved.

Joy is the one who usually runs things and Sadness seems to be the one who is never allowed to touch anything. When Anger loses his temper, his head turns into a volcano, spewing fire into the air. Fear looks like a skinny purple bug (think Woody Allen with the head of a frightened Praying Mantis) and is useful for keeping Riley safe. Disgust is a sarcastic, vegetable hater (broccoli? No, thank you!).

The memories – except for the core memories (the most important) are stored in what look like giant, multi-colored databanks, sent there by what could be ball retrieval lanes in a bowling alley (if it was a 23rd century bowling alley).

Riley’s mind has set up important sections/islands – Goofball Island (silliness and fun), Honesty Island, and Friendship Island among them – that are all endangered by a combination of events. The move is the instigating factor, but the way the emotions juggle themselves and Riley’s memories also play a part. When Joy and Sadness are separated from the others in the control room, Riley sinks to ever deepening levels of despair.

As Riley struggles to deal with the move, Joy and Sadness try to find a way back to the command center even as the various manifestations of Riley’s personality begin to crumble. At a certain point, they encounter a nearly forgotten imaginary friend, Bing Bang – a Dr. Seussian elephant-like creature – who tries to help but is limited by not have learned little things like reading. A key moment in this sequence of events begins to change Joy, who has even been separated from Sadness at this point. 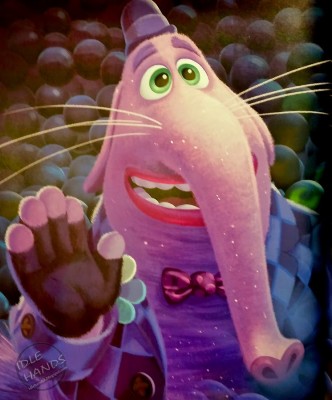 When Joy and Sadness are reunited and finally do find a way back – hitching a ride on Riley’s Train of Thought – other obstacles arise (the train only rolls when Riley’s awake).

Inside Out, then, is a movie about life. When Fear, Anger and Disgust are in charge, Riley makes bad decisions; when Joy is in charge, she’s Daddy’s happy girl. When Joy and Sadness find themselves in Riley’s memory storage area, Joy spends most of the journey trying to prevent Sadness from touching anything – until something wonderful happens and she learns why Sadness is a part of Team Emotion. It’s an event that plays into the pair finally getting home to the command center.

Even when Riley sinks into depression, the film never stops being visually inventive – even through its darkest moments, kids in the audience at the screening I attended were enthralled. They might not have quite understood what was happening, but they could tell it was happening.

Inside Out takes the position that every emotion is important – it shows us that there are reasons for our emotions and that we should not repress them. It’s okay to be sad; it’s okay to be angry. What’s not okay is to allow any one or two emotions run your life. 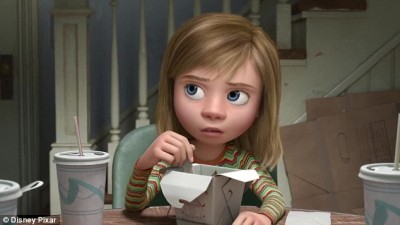 When Joy begins to see that Sadness is necessary, it changes her – and that changes everything for all five emotions. Which in turn changes Riley.

Credit goes to Pixar who greenlit this movie. I can’t think of any other company where a movie about the inner workings of a child’s mind – using anthropomorphized emotions as its main characters – would have been greeted with any enthusiasm.

Instead, we might never have seen an animated gem that could be not only one of the year’s best films, but an achievement that references Hieronymus Bosch and great filmmakers like Ingmar Bergman – thematically if not in precise quotes.

Inside Out does what great cinema should do – draw us into a story so compelling that it makes us think about who and what we really are. While entertaining the living daylights out of us.

Inside Out is accompanied by a very clever, very touching short about a lovelorn volcano, called Lava. It, too, is wonderful.