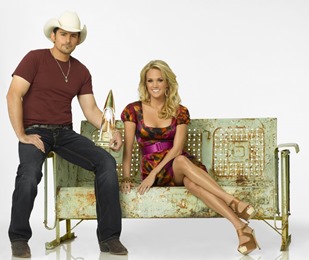 It’s lucky seven for Brad Paisley and Carrie Underwood who will team up to host the 48th Annual CMA Awards for the seven consecutive year. Their easy chemistry and their country superstar status have made them a good fit for the awards and it’s clear that the very country philosophy of ‘If it ain’t broke, don’t fix it’ very much applies here.

The 48th Annual CMA Awards will air, live, from the Bridgestone Arena in Nashville on Wednesday, November 5th – live on ABC. For more, check out the press release after the jump.

NASHVILLE – Country superstars Brad Paisley and Carrie Underwood will be returning to host “Country Music’s Biggest Night™ for the seventh consecutive time in 2014. “The 48th Annual CMA Awards” airs live from the Bridgestone Arena in Nashville on WEDNESDAY, NOVEMBER 5 (8:00-11:00 p.m., ET) on the ABC Television Network.

“Carrie and Brad are unmatched as a hosting team,” said Sarah Trahern, CMA Chief Executive Officer. “They have impeccable comic timing, industry credibility, critical acclaim, and a natural rapport that makes them popular with our live audience and the viewers at home. We are delighted to have them presiding over “Country Music’s Biggest Night.’”

“Brad and Carrie are more than hosts, they are an important part of the CMA Awards brand,” said CMA Awards Executive Producer Robert Deaton. “They bring so much to the table beyond what you see on stage during the broadcast. They are gifted creative collaborators, who routinely raise the bar and set the standard for live television hosting.”

“Over time, there’s been an evolution of who we are as hosts of the show – what fits, what’s comfortable, what’s real,” added Underwood, “and we love being a part of the creative team. We feel the responsibility of what this night means to our music community, to our fellow artists and to the viewers at home.”

“Shoot, we’ve written a bunch of the jokes every year. This’ll just be the first time we have to pay union dues,” said Paisley.

Paisley is a critically-acclaimed singer, songwriter, guitarist, and entertainer whose talents have earned him numerous accolades including three Grammys. A proud member of the Grand Ole Opry since 2001, Paisley earned the first of his 22 No. 1 singles in 1999, writing or co-writing 19 of them. His latest single, “River Bank,” is from his upcoming album, “Moonshine in the Trunk,” to be released Aug. 25. Paisley is currently an expert on ABC’s new hit singing competition “Rising Star,” airing Sunday nights (9:00 p.m., ET), through Aug. 24. Paisley also made multiple contributions to the new Disney animated film “Planes: Fire & Rescue,” with a voice cameo as a pick-up truck named Bubba, as well as recording two songs for the soundtrack: “Runway Romance” and “All In,” which Paisley wrote and serves as the final song in the movie. Paisley is currently headlining his “Country Nation World Tour presented by KRAFT Cheese” through the fall. Visit www.bradpaisley.com for more information.

Underwood emerged from the promise of her 2005 “American Idol” win to become a true multi-format, multi-media superstar, spanning achievements in music, television, and film, where the six-time Grammy Award winner has amassed more than 95 major honors, sold more than 64 million records worldwide, and recorded 18 No. 1 singles, nine of which she co-wrote. Underwood was recognized as Pollstar’s Top Female Country Touring Artist for each of her headlining tours in 2008, 2010, and 2012. Her four albums, Some Hearts, Carnival Ride, Play On, and Blown Away – each certified multi-Platinum or Platinum – tallied 38 weeks at No 1 on Billboard’s Top Country Albums chart with songs that have now been streamed more than 800 million times worldwide. A proud member of the Grand Ole Opry since 2008, Underwood last year became the musical voice of primetime television’s No 1 program, “Sunday Night Football” and starred as Maria von Trapp in the three-hour, holiday blockbuster and Emmy-nominated, “The Sound of Music Live!,” whose airings attracted 44 million viewers.

The CMA Awards nominees and winners are determined by more than 7,000 professional members of CMA, which was the first trade organization formed to promote an individual genre of music in 1958. Winners of “The 48th Annual CMA Awards” will be determined in a final round of voting by eligible members of CMA. CMA Awards balloting is officiated by the international accounting firm of Deloitte & Touche LLP. The eligibility period for the 2013 CMA Awards is July 1, 2013 to June 30, 2014.

The final nominees in each of the 12 categories will be announced in early September. The third and final ballot will be emailed to CMA members on Thursday, Oct. 9. Voting for the CMA Awards final ballot ends Monday, Oct. 27 (5:00 PM/CT).

Ticket information for the CMA Awards will be announced later this summer with information available at CMAawards.com. Or follow the conversation on Twitter at #CMAawards.

“The 48th Annual CMA Awards” is a production of the Country Music Association. Robert Deaton is the Executive Producer and Paul Miller is the Director. The CMA Awards will be shot in high definition and broadcast in 720 Progressive (720P), ABC’s selected HDTV format, with 5.1 channel surround sound.

The first “CMA Awards Banquet and Show” was held in 1967. The following year, the CMA Awards was broadcast on television for the first time – making it the longest running, annual music awards program on network TV. The CMA Awards have aired on ABC since 2006. ABC will be the network home of the CMA Awards and CMA’s other two television properties, “CMA Music Festival: Country’s Night to Rock” and “CMA Country Christmas,” through 2021.

A high-resolution, downloadable 2014 CMA Awards logo and photography from the 2013 CMA Awards is available at CMApress.com. The site is password protected for media use only. Credentialing for the 2014 CMA Awards will start in September. Keep up to date with the latest CMA news by following us on Twitter at www.twitter.com/CMAmedia.