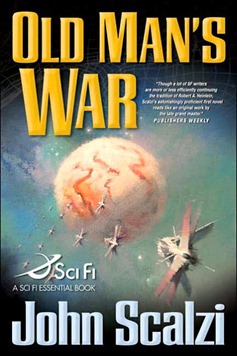 The series follows John Perry who, at age 75, volunteers to join the Colonial Defense Force to get a new body and fight the ongoing war for humanity to win a place in the cosmos. His new body is engineered to withstand the rigors of interstellar war – and is green (boy, do I hope they keep that bit!). This would be Scalzi’s second potential series in two years – FX is working on developing his sci-fi satire, Redshirts.

As a fan of the books (Old Man’s War, Ghost Brigades, The Last Colony, Zoe’s Tale, The Human Division), I would love to see this go to series. Follow the jump for more details.

Additionally, Jake Thornton and Ben Lustig (both currently developing Winter’s Knight for Columbia Pictures) have been signed to write the pilot. Universal Cable Productions is producing the series for the network, along with Petersen’s Radiant Productions, and Stuber’s Bluegrass Films.

Ghost Brigades follows John Perry, who at seventy five, enlists into the Colonial Defense Force to fight a centuries-long war for man’s expansion into the cosmos. Technology allows experiences and consciousness to be transplanted into younger bodies that are outfitted to endure the harsher rigors of war in space. However, soon after John arrives, he finds himself involved with a mysterious woman, and at the same time, at the center of an unraveling conspiracy involving an elite fighting force known as The Ghost Brigades.

Radiant Productions has a number of high-profile television event projects, including: “King David,” written by Ron Parker about the life of the biblical king; “City of Lies,” an international espionage thriller set in Vienna, and written by Michael Beckner; and “Endurance,” based on the fascinating true story of Sir Ernest Shackleton’s iconic Antarctic expedition.