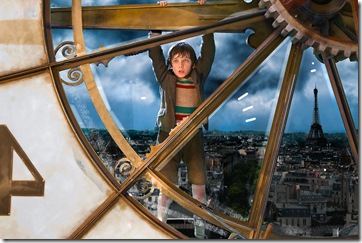 Hugo is the tale of an orphan boy, named Hugo [Asa Butterfield] who lives between the walls of a Parisian train station where he cares for the building’s mammoth clocks and painstakingly works to repair an automaton that he believes contains a message from his late father [played in flashback by Jude Law].

Between dodging the Station Inspector [Sacha Baron Cohen] and his dog, Maximilian, and sneaking bits of clockwork from a bitter old toymaker/repairman, Hugo’s life is filled with close calls and frustration. When the old man catches him trying to lift another bit of clockwork, he begins a journey that will change his life.

From the opening sequence – a giant clockwork that dissolves into Paris at night, with a train station at the hub – Scorsese uses 3D to draw us into this new and simultaneously familiar and strange world. As the camera swoops low and moves into the train station, we seem to literally pass through the crowds of people embarking and disembarking from the trains.

For the better part of the film, Scorsese’s use of 3D draws us in, but that doesn’t mean that he doesn’t have a few moments of fun where something seems to come off the screen towards us. It’s just that he uses 3D to tell the story, rather than impress us with cheap stunts – and when he does throw stuff at the audience, it has even more impact because we’ve been through the claustrophobic tunnels through Hugo races, or felt vertigo from following him down a ladder into a clock suspended over the great station.

Because we become so immersed in Hugo’s world so quickly, when he meets and becomes friends with Isabelle [Chloe Grace Moretz] – a girl his own age who loves playing with vocabulary – the emotions of the sequence are more pronounced. And when he discovers that she holds the key to his making the automation work, we’re right there with him. Although Moretz is, as usual, brilliant [really, can she even make a misstep?], the film works because Butterfield both Hugo’s exuberance and joy, and his deep melancholy – without making him even the slightest bit precious. 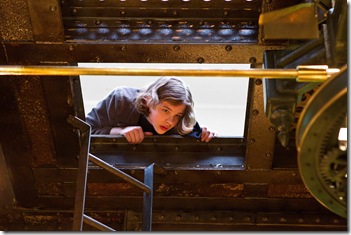 But Hugo isn’t just about a boy trying to reconnect with his dead father, it’s about passion – and, especially, passion for movies. Other than working on the automaton together, Hugo’s fondest memories of his father are when the two would go to see movies. The way the automaton leads him to a legendary filmmaker – bitter because he feels like no one remembers his work – and the connection to his father is a wonderful thing. At this point, the film takes an odd but compelling turn as we learn about the filmmaker George Melies – the father of special effects, set design , the technique of dissolves and more – who turns out to be the bitter toymaker, and Isabelle’s godfather!

Somehow, writer Josh Logan – who adapted Hugo from Brian Selznick’s novel The Invention of Hugo Cabret – and Scorsese take what could have been very dull material and give it a sparkling life that can hold the interest of anyone who is entranced by the movies.

Another interesting facet of the film is the way that we see bits of classic films and then Logan and Scorsese devise thrilling homages to them.

And just to add a little something extra to the film – a bit more depth – there are characters unique to the movie who populate the station – like Lisette [Emily Mortimer], the flower girl upon whom the Station Inspector has a crush, or the couple [Richard Griffiths and Frances de la Tour] whose romance seems doomed because her dog does not like him, or legendary jazz guitarist Django Reinhardt [Emil Lager]. Each of these has an arc within the greater story that adds richness to the tapestry that Scorsese is weaving.

Scorsese weaves so many elements together, so well, that Hugo becomes a living breathing paean to film while remaining an entrancing entertainment.