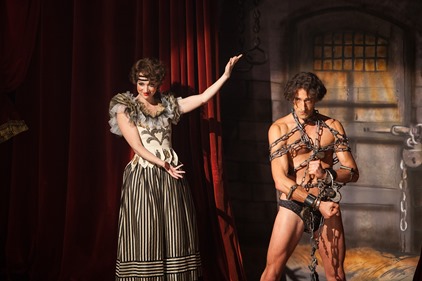 New York, NY – July 21, 2014 – HOUDINI, a new two-night scripted miniseries airing on September 1 and 2 at 9 p.m. ET/PT on HISTORY®, is the story of a man who can defy death, but who really was the man behind the escapes? The event miniseries follows the epic tales of Harry Houdini as he emerges as America’s first bonafide world-renowned superstar.

From humble beginnings at circus sideshows to sold-out concert halls, Eastern European immigrant Erich Weiss rose to become a household name across the globe – Houdini. Academy Award® winner Adrien Brody (The Pianist) stars as The Great Harry Houdini as he finds fame, engages in espionage, battles spiritualists, and encounters the greatest names of the era, from U.S. presidents to Arthur Conan Doyle and Rasputin. A thrilling ride throughout Harry’s psyche, HOUDINI delves deep behind the curtain into his life through his stunts, his visions, and his mastery of illusion.

Joining Brody is Kristen Connolly (House of Cards, The Cabin the Woods) as Bess Houdini, the love of Harry’s life and right hand when it came to some of his most amazing feats, and Evan Jones (A Million Ways to Die in the West, The Book of Eli, Gangster Squad) as Jim Collins, Harry’s assistant and confidant.

HISTORY®, now reaching more than 98 million homes, is the leading destination for award-winning original series and specials that connect viewers with history in an informative, immersive and entertaining manner across all platforms. The network’s all-original programming slate, including scripted event programming, features a roster of hit series including American Pickers®, American Restoration™, Ax Men™, Counting Cars™, Pawn Stars®, Swamp People® and The Legend of Shelby the Swamp Man as well as HISTORY®’s first scripted series Vikings, and epic miniseries and special programming such as The Bible and the Emmy® Award-winning Hatfields & McCoys, Men Who Built America, Gettysburg, Vietnam in HD, America The Story of Us®  and 102 Minutes That Changed America. The HISTORY® website is the leading online resource for all things history, and in 2011, the United States Library of Congress selected HISTORY®’s Civil War 150 site for inclusion in the historic collection of Internet materials related to the American Civil War sesquicentennial.  www.history.com. For more press information and photography, please visit us at http://press.aenetworks.com

Lionsgate is a leading global entertainment company with a strong and diversified presence in motion picture production and distribution, television programming and syndication, home entertainment, family entertainment, digital distribution, new channel platforms and international distribution and sales. Lionsgate currently has over 30 television shows on more than 20 networks spanning its primetime production, distribution and syndication businesses, including such critically-acclaimed hits as the multiple Emmy Award-winning Mad Men and Nurse Jackie, the comedy Anger Management, the network series Nashville, the syndication success The Wendy Williams Show and the critically-acclaimed hit series Orange is the New Black.

Photo by Egon Endreyi/Courtesy of History