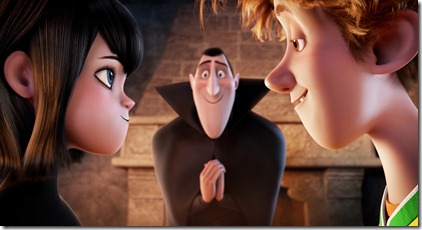 Genndy Tartakovsky – who’s given us such delights as Dexter’s Laboratory, Samurai Jack and Star Wars: The Clone Wars – has taken a time-worn plot about an overly protective father and romance between a young couple who (really) come from different worlds and given it a lunatic freshness in Hotel Transylvania.

Driven mad by grief when a mob killed his beloved wife, Count Dracula (voiced surprisingly well by Adam Sadler) built an isolated, gothic bastion of refuge where monsters of all kinds could relax, secure in the knowledge that they would be unmolested by mobs of angry humans. When his daughter, Mavis (Selena Gomez), turns 118, he has to allow her to leave the safety of home – but he has a plan to make her return.

Meanwhile, the annual gathering of monsters from around the world is taking place – werewolves, ghouls, the Frankenstein monster’s family, and more, have arrived for their worry-free vacation. Well, worry-free except for the mischievousness of the werewolf kids and an unexpected arrival – Jonathan (Andy Samberg), a backpacking human traveler who has penetrated the hotel’s defenses (turns out they acted more as enticements for this laid back young man). 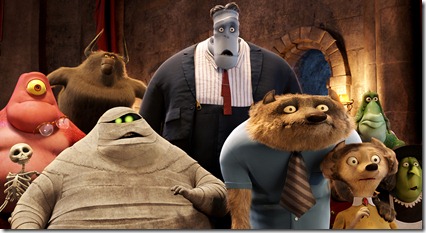 Everything revolves around Mavis’ birthday party and, to Dracula’s horror, she and Jonathan make a connection. Talk about mismatched couples!

Presented in remarkably effective 3D (check out the way that fog swirls past the Sony Animation credit at the beginning!), Hotel Transylvania features animation that rivals DreamWorks Animation and approaches Pixar quality.

Director Tartakovsky takes familiar elements and gives them enough of a twist (how about a henpecked werewolf dad?) that the story feels fresh – and the movie layers in lots of gags for the kiddies while playing on another level for adults.

The voice cast is excellent – Steve Buscemi (Wayne, the harried werewolf), Molly Shannon (Wanda, the in-charge werewolf mom), Kevin James (the amiable Frankenstein’s monster), Fran Drescher (the uptight Bride of Frankenstein), David Spade (the obnoxious Invisible Man)and more – deliver the goods with a panache that goes beyond anything I was expecting when I entered the theater.

While Hotel Transylvania isn’t the best work Tartakovsky has done (that would Samurai Jack), it certainly won’t diminish his resume. It’s a fast-paced, genuinely funny movie that combines slapstick with horror tropes (think Abbot and Costello Meet Frankenstein) and a dash of melancholy to produce an old-fashioned likability that’s hard to ignore.