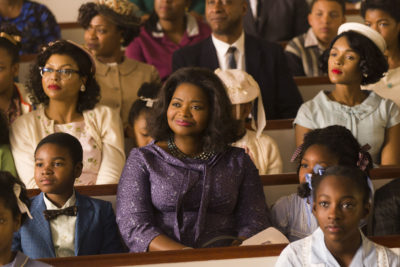 Hidden Figures, which had a two theater Christmas release for awards consideration, opens wide this weekend and it is a remarkable film.

The story of three African American women who made major contributions to the space race while working for NASA in 1961, it is a story of glorious achievement against a background of casual racism and sexism.

The film opens with a textbook scene that has more resonance than ever as three black women are trying to get a stalled car going when a police car pulls up and the officer gets out – and demands to see their identification. He is clearly showing antagonism – until he discovers that they are working at NASA, helping the American space program in the space race.

Before our eyes, he becomes thrilled to help – giving them an escort to work so that they won’t be late. In those moments, he goes from being a potentially dangerous racist to a guy who wants to beat the Russians into space and is willing to help anyone who is helping to do that.

They work in a building separate from the rest of the complex – this is Virginia in 1961 and segregation is still the law – in a room designated ‘Colored Computers’. Dorothy is, for all intents and purposes, the supervisor but without the title and pay.

Katherine finds herself assigned to the Space Task Group – the math geniuses who work on the physics and math of space flight – setting launches, orbits and re-entries. She is not only the only African American in the room, she’s the only woman. 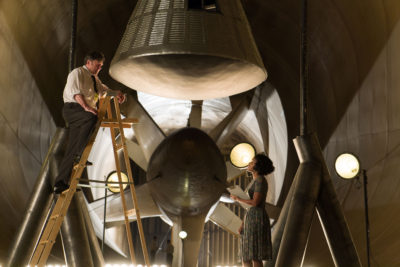 Mary – among other things – helps with the engineers who design the space capsule’s heat shields.

The majority of the film – by a slight margin focuses on Katherine and her struggles to deal with a roomful of men who set out their racism and sexism by setting up separate coffee pot labeled ‘Colored’ and blocking her getting the data she needs because the protocols in place don’t say anything about women.

When her boss, Al Harrison (Kevin Costner) complains about her frequent forty-minute breaks, she explodes – the only bathroom for colored women in the block where she used to work, a half-mile across the complex!

Her progress is also slowed by Harrison’s second-in-command, Paul Stafford (Jim Parsons) – who refuses to share credit with for – for her work.

Harrison, being practical and having only the programs goals in mind changes that while noting that ‘at NASA we all pee the same color!’

Dorothy and Mary’s experiences with their superiors are not as good (and it should be noted that Harrison is a very demanding boss).

While the events of the film are in progress, NASA is having its first IBM computer installed and, seeing where progress is headed, Dorothy teaches herself and her fellow computers Fortran so they won’t be made redundant by the new machine.

While the tensions of the space race – and the work at NASA – are first and foremost in the film, it also makes room to show us significant moments in the lives of the three women. We see them at home and at church, and we watch as Mary and Dorothy set up Katherine with a new member of the congregation, Col. Jim Johnson (Mahershala Ali) – and follow that relationship as it leads to marriage. 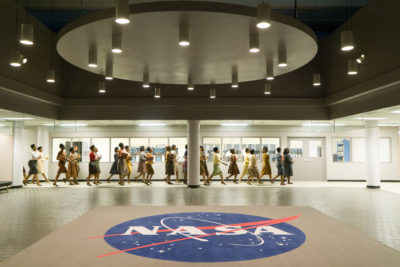 We also get to see Mary’s husband, Levi Jackson (Aldis Hodge) – a man who is strong in the civil rights movement but has the good sense not to get between his wife and her desire to become an engineer.

The drama of the film comes in watching these women’s work figure in John Glenn’s historic flight into orbit – and even though we all know how it worked out, the film draws us in to the point that his re-entry problems feel like they’re happening right now – and we are on the edge of our seats!

While the largest aspect of Hidden Figures is showing how these three women came to play significant roles in the space race, one the most important things it does is show just how deeply ingrained racism and sexism were ingrained in the culture in 1961.

There’s a scene where Mary gets a drink at a ‘Colored Only’ public fountain – which is situated less than four feet from an identical fountain labeled ‘Whites Only.’ That, in and of itself is heartbreaking, but what really makes the scene important is showing the white mother and child who, having just stopped at their fountain, scurry away at her approach – like she’s some kind of animal that might bite if they get too close.

It’s a single moment among several that reinforce the reality of the world Katherine, Dorothy and Mary live in – and between other equally small moments and that opening sequence with the police officer, the effect lends a chilling undercurrent to what is, overall, a feel good movie about three African American women who achieved great things at a time when it was much more difficult than it is today.

Based on the book by Margot Lee shetterly and co-written by director Ted Melfi and Alison Schroeder, Hidden Figures is witty and charming and, occasionally, devastating. It’s a remarkable film that – had I seen it last month – could well have been among my favorite films of 2016 (it will definitely be a contender for 2017).

Oh. One more thing – my headline comes from a line that comes early in the film… which I’ll not spoil. It’s also wonderful.