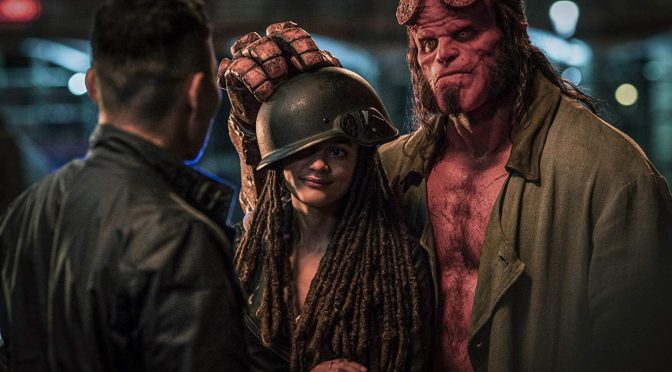 Yes, there is more gore, but it’s mostly there just to be gore. It adds nothing whatsoever to the story.

David Harbour would have been an excellent Hellboy if he’d been given something to work with; Daniel Dae Kim’s Daimyo is mostly just a real prick until the third act – when he becomes sort of interesting.

There are some great action sequences, but the actual story is haphazard and mostly inert – though the CGI are pretty good (considering the budget for Hellboy is a lot smaller than the average superhero movie).

From the florid prologue that introduces Blood Queen Vivian Nimue (Nim-way), Hellboy has problems with writing and pacing – Nimue (Milla Jovovich)’s operatic opening lines sound like the kind of lines you’d find in a particularly poor version of a comic written by someone who had only heard of the real comic.

Hellboy’s origin – shown in flashback – is awful except for the first of two sequences featuring Thomas Haden Church as Lobster Johnson (the other is in the first post-credits tag).

Professor Broom (Ian McShane) is, essentially, Basil Exposition in a supernatural, superhero drama. He is completely unbelievable as any father – let alone Hellboy’s. (Whereas, John Hurt’s version in the Del Toro films looks and sounds like he stepped out of the Mike Mignola comic).

Whatever semblance of plot there is lurches from inert/inept plot/character beats and those mostly excellent fight sequences.
We move from Arthurian times (Arthur put down the immortal Nimue and had her body chopped in chunks to buried far away from each other so she could never be reassembled and regain her power), to the B.P.R.D., where Broom sends Hellboy on a mission to help their English equivalent to hunt down some giants.

Things go sideways right away, but never mind betrayal and giant-killing, because in comes Baba Yaga (from Arthur to Russian folklore and onward to…) to offer Hellboy a deal that will enable him to deal with Nimue.

Seriously, plot and character-wise, Hellboy is all over the map – literally!

The biggest storylines in Hellboy play heavily on the Arthurian legends, but ghosts, demons, were-creatures and more create a dramatic hodgepodge that never really hangs together.

In the title role, David Harbour gets to play either the cool, deadly paranormal investigator or a hormonal teenager. There is no middle ground whatsoever.

Somehow, though, Harbour manages the role without coming off too badly (I think he’d have killed it if the script had been by del Toro).

The only other character with any life at all is Alice Monaghan (Sasha Lane). She’s gotten the gift of hearing the dead (and other stuff as required by the plot) after having been taken by fairies (a changeling left in her place) until Hellboy rescued her.

Frankly, I never thought I’d ever come close to nodding off during a Hellboy movie, but even with the raucous soundtrack (lotsa great heavy tunes) I came close a number of times. I also finished by Coke Zero Sugar well before the closing credits. (Never a good sign.)

If only because Thomas Haden Church has two terrific scenes (lasting less than three minutes) as Lobster Johnson; and because Sasha Lane’s character rises way above her material, and David Harbour manages to salvage some of Hellboy’s cool from a dreadful script, I’m not giving Hell boy an F.