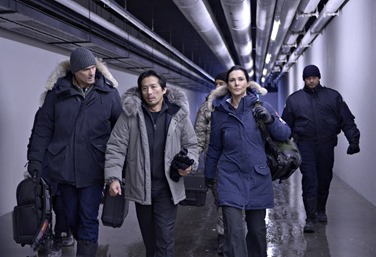 There have been enough movies and television shows built around the idea of epidemic outbreaks hat it has pretty much become a trope. Helix (Syfy, Fridays, 10/9C) may the latest effort to use the idea, but it succeeds through a combination of terrific writing, mostly excellent casting, critical pacing and an unexpected use of music.

As Do You Know the Way to San Jose plays (smartly, in the room) we follow two hazmat-suited figures as they survey a locked, presumably secure area. There a number of bodies – most at least partially covered in some kind of black liquid. One man is still alive. One of the suited up men asks what this is and the other replies, ‘Progress.’ We will see them later…

We cut to the CDC, where Dr. Allan Farragut (Billy Campbell) has just finished welcoming new recruits when his is informed that he has been requested to investigate an outbreak at an Arctic Biosystems research and development facility above the Arctic Circle. His ex-wife, Dr. Julia Walker (Kyra Zagorsky) had been specifically requested and she felt it necessary to include him because of the identity of the survivor we saw earlier – it’s his brother, Peter (Neil Napier).

A team is put together – Farragut, Walker, Dr. Doreen Boyle (Catherine Lemieux), Dr. Sarah Jordan (Jordan Hayes) and Major Sergio Balleseros (Mark Ghanimé) – and they are whisked off to the Arctic where we meet the facility’s head man, Dr. Hiroshi Hatake (Hiroyuki Sanada) and his head of security, Daniel Aerov (Meegwun Fairbrother). 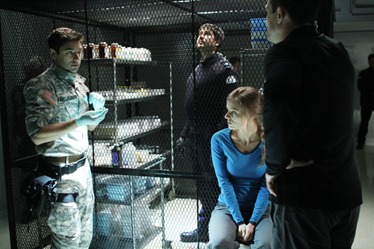 Series creator Cameron Porsandeh has taken the familiar elements of an outbreak story and filled it with fresh twists and intriguing, frequently engaging characters – almost all of whom have kind of personal/secret agenda. The connection between Allan, Peter and Julia might, at first glance, seem clichéd but there’s a twist that makes it new – one that makes Jordan seem less and less of a possible future love interest for Allan than might have been the case in other circumstances.

The relationship between Hatake and Aerov is also intriguing. Major Balleseros and Boyle wind up spending a fair bit of time together and she’s quick to call him on his BS. Boyle seems like potential comic relief, but there’s far more to her – just as there is to every character. In her case, though, it might have been better to make her French, or French-Canadian – Lemieux’s accent has a habit of wandering (though otherwise, she’s very effective).

Despite setting the story in a research facility that employees over a hundred people and seems quite massive from the outside, he has created a very claustrophobic setting – made even more so by the cool blues, greens and whites of the facility’s halls, labs and personal quarters. The only relief from the claustrophobia is to go outside, where the weather could kill you. As closed environments go, it’s a doozy.

And then there are the monkeys…

Over the course of the three episodes made available for review (the two-hour premiere, Pilot/Vector and 274), we get hints that there is something more going on here than just an outbreak story – just not quite enough to deduce where else the series is going. That kind of tantalization made even more teasing by the very deliberate pacing of the series – thank you Jeffrey Reiner) makes Helix more than just another good sci-fi series – it makes it, potentially, a great one.

I know it works for me because I will never, ever be able to listen to bossa nova without being – on some level – creeped out

Photos by Philippe Bosse/Courtesy of Syfy