In CLA$$WAR: The Collected Edition Rob Williams’ spins the tale of superhero patsies helping to prop up a corrupt American government [and the powers behind the scenes] – and one hero, American, who dares to let the country know what’s really going on. It’s a remarkably mature work for a first-time writer [Note: CLA$$WAR was produced 2002 – and was written earlier than that: Williams has since written for Marvel, Dark Horse and others]. The hardcover edition being reviewed came out late last year]. 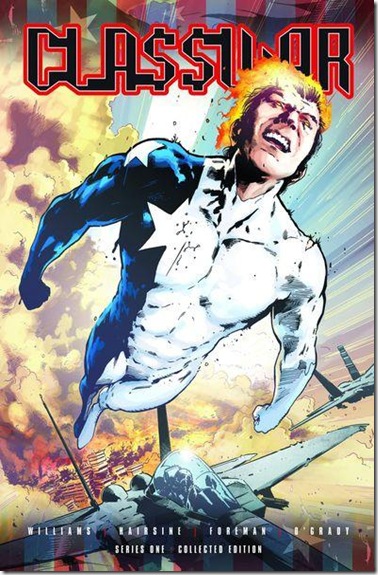 It’s not a happy America. Civilians are fed rah, rah stuff that seems to go against what they’re seeing with their own eyes. Cover-ups abound. American – aided by an elderly black man named Isaac – has already uncovered some of the stuff that’s been swept under the carpet and he’s not ready to stop. So, President Bush [this was written before Dubya had become POTUS] orders his former team members [Code Name: Enola Gay – some of this stuff ain’t hard to figure out] to take him out – even if they have to nuke the country of Genada [the dictatorship being one they helped set up].

I can tell you that, from the new prologue for this collected edition to the last page of the story, CLA$$WAR is something different – Watchmen different. Of course, CLA$$WAR was the first comic written by Rob Williams – and he was fortunate that his publisher, Com.X was able to find him artists of the caliber of Trevor Hairsine and Travel Foreman to bring his scripts to life. If you should happen to be looking for a superhero tale that digs a little deeper – or even a lot deeper – CLA$$WAR will give you a smart, fast-paced adventure that operates on several levels.

The one thing that bothers me most about CLASSWAR is that it ends on something of a cliffhanger – and sets up a situation that cries out for a Series Two. Perhaps, now that the series has this beautiful hardcover release from Com.X – which is garnering some pretty amazing reviews, including here – it will become viable for that to happen.

This edition of CLA$$WAR comes with forwards by Andy Diggle [Daredevil, Thunderbolts], Craig Johnson [Comics Village] and Rob Williams [who’s gone on to write Judge Dredd, Wolverine, Indiana Jones and Star Wars, among others]. Then there’s the gallery of twelve covers for the various editions [including an unpublished beauty by Ben Oliver] and three posters [plus pencil & stages and ink & colour stages for one of the posters]; the original sixteen-page proposal submitted to Com.X; Trevor Hairsine’s pencils for the final draft of the first issue; a gallery of sketches by Travel Foreman, and a page of acknowledgements. Not a bad haul for a mere twenty-five bucks – not a bad package for twice that.

One thought on “GRAPHIC NOVELS: CLA$$WAR – Series One: Collected Edition – Conspiracies: Superheroes – Part of the Problem and Part of the Solution!”