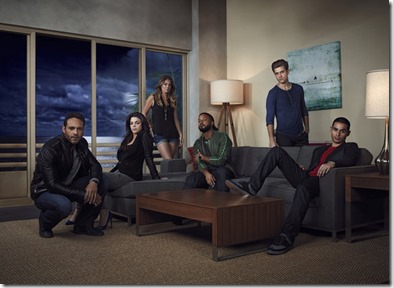 Graceland (USA Network, Thursdays, 10/9C) comes from the creator of White Collar, Jeff Eastin, and is based on a real situation in which agents of the FBI, DEA and US Customs shared a beach house that became government property because it was gained through funds made by criminal means. The series follows rookie FBI agent Mike Warren (Aaron Tveit, Gossip Girl, Les Miserables) as he gets plugged into this unusual setting with an unusually odd assortment of representatives of the three agencies – each (including him) with their own secrets.

The premiere opens with the graduation ceremony of the newest batch of FBI agents. As they listen to a speech, another agent is taking part in a drug buy sting that goes bad. Agent Warren is hustled into Graceland, formerly the beach house of a druglord on a lovely stretch of Southern California beach, as a temporary replacement for the agent who screwed up – and is now recovering in a safe house. It’s not the assignment he hoped for (DC), but one he accepts with some equanimity because he’s now in the field.

Things are still not going as he expected. His cover is blown before he even gets of the airplane – the guy who is picking up at the airport! That would be prankster and fellow G-Man Johnny Turturro (Manny Montana, Cybergeddon), who delivers him to Graceland where he meets (in no particular order): his trainer, legendary FBI agent, Paul Briggs (Daniel Sunjata, Rescue Me), FBI agent Catherine ‘Charlie’ DeMarco (CSI: NY‘s Vanessa Ferlito), DEA agent Lauren Kincaid (Scottie Thompson, Monsters) , Customs agent Dale Jakes (Brandon Jay McLaren, The Killing, Falling Skies) and, eventually (episode 2) DEA agent Paige Arkin (Serinda Swan, Breakout Kings). 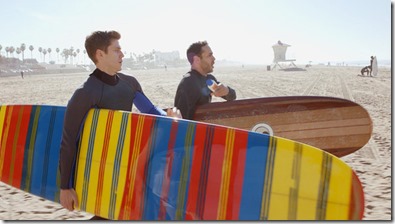 The premiere sees Warren learning the ropes and being pressed into a hastily improvised operation that leads in an inexorable path to his being required to do something extremely hardcore. This is most definitely not White Collar.

Unlike most USA Network shows, Graceland doesn’t play as a ‘blue sky’ series. Instead of breezy with occasional dark undertones, it plays out as more real, grittier. Assignments range from busting a truckload of stolen jeans to a bird smuggling ring to the kind of drug sting that gets that agent shot in the teaser.

We see drug addict moms who can’t look after their children; Russian druglords; Jamaican smugglers and small time independent criminals. Where there’s humor, it’s developed from situations as opposed to banter and quips. People bleed on this show.

In this world, young Agent Warren is a real fish out of water. Nothing is like he expected; he’s got to share a house with (among others) the partner of the agent who was shot in the teaser (she’s adamant about him not touching his stuff) – he doesn’t even surf (unlike Briggs, his training agent). He’s eager, but this is a place where unchecked eagerness could get him killed – even if he didn’t have that secret I mentioned before.

The episodes that have been made available for review are well written, beautifully shot, and entirely unpredictable. The characters are well drawn for a series pilot – especially Warren (Tveit is a definite gem) and Briggs, whom Sunjata plays as a Zen master/rules-phobic kinda guy.

The premiere, written by Eastin and directed by Russell Lee Fine (White Collar), isn’t quite perfect – too many characters, too little time (even with this 90-minute pilot) to serve every character and situation as well as they/it might deserve – but it comes awfully close.