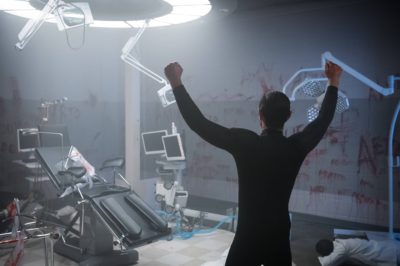 Gotham (FOX, Mondays, 8/7C) returns with a bang this week as Edward Nygma inspires Dr. Hugo Strange with a way to bring the recently resurrected Theo Galavan out of chaotic madness to serve his own purposes.

Wrath of the Villains: Azrael opens with Ed Nygma (Corey Michael Smith) preventing one of his fellow inmates from beating another through shrewd manipulation – as Jim Gordon (Ben McKenzie) questions Hugo Strange (B.D. Wong) about the events that led to the shutdown of Pinewood.

On his way out, he sees Nygma who promises they’ll meet again – after all, who best to get out of a chaotic puzzle of Arkham that someone who’s a master of puzzles?

Following Gordon’s departure Nygma offers to help Strange and gives him a great idea that leads to Strange being able to calm the recently resurrected Theo Galavan (James Frain) – by giving him a new story about who he is.

When Gordon and Bruce Wayne (David Mazouz) brace Captain Barnes about their theories about Strange, Pinewood and the Waynes’ deaths, it doesn’t go well – Barnes puts Jim in the slammer for suspicion of breaking Karen Jenson out of Arkham.

A caped, armored figure storms GCPD to kill Gordon and nearly succeeds before being revealed to be…

Wrath of the Villains: Azrael takes a character from the comics and puts its unique spin on him. Azrael thinks himself an avenging angel who metes out justice to those who have evaded the law. In this case, he’s a brainwashed former Gotham mayor and Gordon – whom he is told is a murderer – is the target of his righteous wrath.

Written by Jim Barnes & Ken Woodruff, Wrath of the Villains: Azrael is trippy bit of noir foreshadowing – Azrael stalks Gotham like a proto-Batman, cape flowing as he runs and leaps from building to building. Director Larysa Kondracki uses noir-ish angles and shadowy lighting to heighten the familiarity of a caped figure towering over Gotham.

For the most part, Wrath of the Villains is an effective, even shocking episode but for one rather major flaw: for the umpteenth time, a villain invades GCPD headquarters and kills a bunch of police officers. Surely by now recruits for the GCPD must be slowing down!

Otherwise, though this is a solid episode of Gotham – even sneaking in a couple of quick scenes to keep us aware of Penguin (Robin Lord Taylor), Butch Gilzean (Drew Powell), Barbara Kean (Erin Richards) and Tabitha Galavan (Jessica Lucas) (and setting up some no doubt big arcs for the last few episodes of the show’s second season.