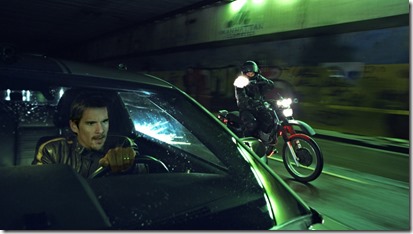 Surprise! Selena Gomez can act! Bigger (or lesser, depending on your point of view) surprise – it doesn’t matter because Getaway is so far beyond awful that it even fails to be bad enough to be good.

Brent Magna (Ethan Hawke, stalwart in the face increasing idiocy) is a former pro racer who got out of the sport because of self-esteem issues and wound up doing time for doing ‘some things I’m not proud of.’ He and his wife, Leanne (Rebecca Budig) relocated to Sofia, Bulgaria to start over (because that’ where she was from).

The film opens with their home being invaded and Leanne being taken. Then Magna gets a call and is given a choice: do what the caller says or his wife dies. He’s given a series of tasks that begin stealing a specific car (a Shelby Super Snake Mustang) with driving through public areas – an outdoor market, a skating rink – destroying everything in his path. As stops for a breather between tasks, a kid (Selena Gomez) climbs into the car waving a gun. He’s stolen her car and she wants it back.

Did I mention that in the 48 hours since it was stolen, it’s been armored and fitted out with cameras inside and out? Yup. Because it was going to have to destroy stuff…

Anyway, back to The Kid, who is super pissed, but not really good with a gun – Magna easily disarms her. The voice on the phone orders him to kill her, but he draws the line – and gets praised for making the right call!?! By the time Magna is rolling again, we are once again reassured that Gomez is no longer a Disney girl – language, attitude, flipping the bird… Okay, we get it!

Anyroad, all this is prep for what turns out to be both a physical and cyber crime and Magna has no clue. The Kid of course both figures it out and why she is so oddly connected to it. Conveniently, the Shelby is a product of her mechanical skills – and she’s also a bit of computer wizard. It all comes together (well, not really) over a series of chases that probably kill half the Sofia police department in chases that make those of the second Blues Brothers movie look coherent.

The criminal mastermind, brilliantly credited as The Voice, is played by Jon Voight – who literally phones it in. Part of his motivation is money, but he has a second one that beggars belief and really slams home that this movie is a colossal turkey.

The script was written (and I use that term loosely) by Sean Finnegan and Gregg Maxwell Parker, both making their debut as screenwriters and, hopefully, their swan songs. Getaway is largely incoherent and notable mostly for giving Gomez a chance to thoroughly impress upon us her cut ties with Disney.

Though the script is pretty awful, it might have been saved – everyone loves a good car chase or two – if not for director Courtney Solomon’s (an American Haunting, Dungeons & Dragons) hacking it further with poorly lit action; unfocused storytelling and overbearing, unnecessary editing. Worse, it makes ninety minutes feel ninety hours (I finished my drink well before it was over!).

In almost all respects, Getaway makes this summer’s other bad movies (I’m looking at you The Mortal Instruments: City of Bones) look like high art. From the fact that it’s not about any kind of getaway (though the title obviously wants us to think of it in terms of Sam Peckinpah’s excellent The Getaway, starring Steve McQueen and Ali McGraw, it reminded me more of Uwe Boll) to its poorly realised car chases (we never know where anyone is relative to anyone else – partly because of murky lighting; partly because the editing is frantic but without discernible purpose), Getaway is the worst movie of summer 2013.