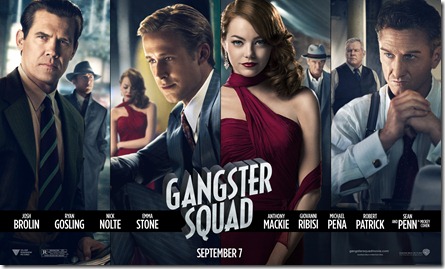 Gangster Squad tells the tale of a squad of off-book cops who had a mandate to take down boxer-turned-crime boss Mickey Cohen by any means necessary. Neither cops nor crooks come off well in it.

Gangster Squad takes a page from history and, essentially, turns it into a loud, violent comic book – only without the kind of character development comics insist on now. With one exception, the characters are one dimensional and aren’t really given the time to be anything more.

Mickey Cohen (Sean Penn), is presented as a one-note homicidal maniac with a super-sized ego which makes it hard to believe that he could charm his way to the top of the organized crime ladder as the real Cohen did. There are nods to Cohen’s love of playing to the press and entertaining the rich and influential, but throughout he comes across as the kind of charmless loser that would be squashed by rivals before he ever got started.

Mireille Enos, as the war hero’s pregnant wife, Connie, is the one truly resonant character – as much through her talent as through the writing. She’s smart, caring, thoughtful and the brains behind the squad her husband puts together – in one of the film’s few genuinely delightful sequences, she selects the members of his team and gives her reasoning. 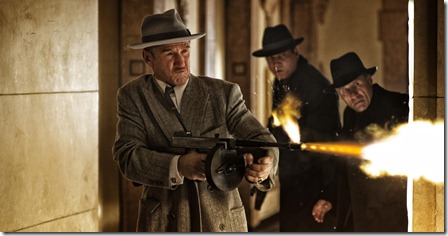 The movie plays the squad’s first endeavors for laughs – busting into an illegal Burbank casino in which several cops, in uniform, are gambling and providing security – but the sequence feels forced after we’ve seen the opening sequence in which Cohen has a representative of the Chicago mob executed by being pulled apart by a couple of cars.

At one point, Wooters tells O’Mara that they have to be smarter, but it never really happens – despite the excellent work of Keeler in planting a bug in Cohen’s TV.

Brolin, Gosling, Stone and Enos come closest to making their characters feel real in spite of the writing, but Penn is woeful as Cohen, as though all it takes to bring this particular gangster to life a snarl and and some less than subtle makeup.

Gangster Squad looks great (great cinematography, production design, costuming) and director Reuben Fleischer (Zombieland) does keep everything moving along and hits a few unexpected comedy beats that keep things from getting too dark – until a final shootout that turns into a bare knuckled boxing match and plays out as if Fleischer suddenly decided he wanted to play Tarantino.

The saving graces for the movie, as a January release: it’s got great action – fights, shootouts, explosions and the funniest jailbreak attempt I’ve seen in years – all extremely well done; it really is beautiful to look at – Fleischer and cinematographer Dion Beebe have used a richer palette that gives the feel of technicolor, with brighter reds, deeper blues and great textures; the sets are outstanding recreations of the period – from a blues/jazz bar on the black side of town, to the posh restaurants the likes of Cohen frequent; the superb recreation of period clothing and finally, the music – both in terms of the score and the period songs used to bring the period to life. And there are those four performances – by Brolin, Gosling, Stone and Enos that give the film at least some heart.

Gangster Squad is a decent enough ride for anyone looking for a fast-moving tale of cops and gangsters that isn’t so much based on history as sorta, kinda inspired by it (like maybe writer Beall read the book’s dust jacket). If it had been released during December, it wouldn’t have had a chance. For the January Burn-off Zone, though, it’s a cut above the usual.