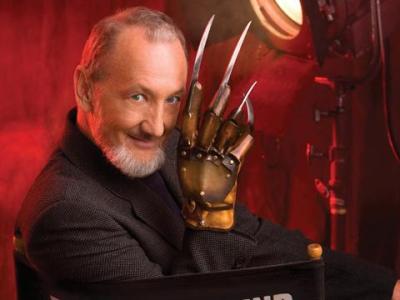 For the town of Jasper, Alabama, getting their horror movie, Thr33 Days Dead has been a kind of nightmare – they’ve been working on it for six years – but on two November episodes of Syfy’s Town of the Living Dead, Japer will welcome the maker of another kind of nightmare: Robert Englund, the original Freddy Krueger.

Englund will appear in the episodes airing on November 11th and 18th, as the Thr33 Days Dead team ask him to inspire director Jim Ware to carry on after some recent setbacks.

After the Thr33 Days Dead team hit their most challenging production hurdle to date, they’re desperate for hope.  When they discover that horror legend Robert Englund will be nearby in Birmingham, Alabama for a press appearance, the team sets out to recruit him to inspire their dispirited director, John Ware.

In Town of the Living Dead, the colorful folks of Jasper, Alabama are determined, once and for all, to complete their zombie movie Thr33 Days Dead… now six long years in the making. Based on a town urban legend, their film centers on a group of friends trying to survive a zombie apocalypse in rural Alabama. The series follows the intrepid and motley crew of amateur filmmakers as they surmount endless obstacles to finally finish their movie. Town of the Living Dead is produced by True Entertainment (The Real Housewives of Atlanta, Season 25: Oprah Behind the Scenes).  Executive producers are Glenda Hersh, Steven Weinstock, David Stefanou, Todd Hurvitz,Tony Biancosino and Cherie Kloss.

Syfy is a media destination for imagination-based entertainment. With year round acclaimed original series, events, blockbuster movies, classic science fiction and fantasy programming, a dynamic Web site (www.Syfy.com), and a portfolio of adjacent business (Syfy Ventures), Syfy is a passport to limitless possibilities. Originally launched in 1992 as SCI FI Channel, andcurrently in 96 million homes, Syfy is a network of NBCUniversal, one of the world’s leading media and entertainment companies.  NBCUniversal is a subsidiary of Comcast Corporation. (Syfy. Imagine Greater.)