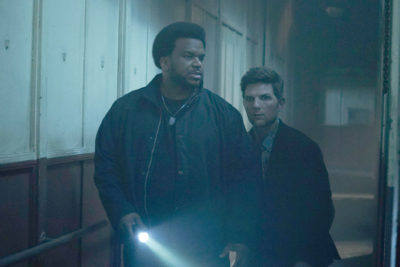 FOX and Twitter are partnering to promote the network’s new and returning shows.

In a Twitter first, the series premiere of Ghosted will stream from September 21-24, in advance of the show’s premiere, while Twitter will stream a weekly pre-show for Empire beginning September 20th.

In a Twitter First, Premiere Episode of FOX’s New Fall Comedy, GHOSTED, to Stream from Sept. 21-24, in Advance of Series Premiere

Fox Broadcasting Company (FOX) and Twitter today announced they will partner on a wide range of streaming initiatives to launch returning series EMPIRE and THE MICK, as well as the network’s new comedy, GHOSTED.

“With so much competition out there, it’s more important than ever to create innovative ways to promote our shows and connect directly to our viewers,” said Shannon Ryan, Chief Marketing Officer of Fox Television Group. “From introducing new fans to GHOSTED, to creating a catch-up opportunity with THE MICK marathon, to building fan conversation for EMPIRE with the live pre-show, this exciting partnership with Twitter allows us to tailor each initiative for every show.”

“FOX programs and talent regularly engage fans and drive conversation on our platform,” said Todd Swidler, Global Head, Live Video Business at Twitter. “We’re excited to partner with FOX to bring TV viewing and conversation even closer together. The discussion of TV shows has always taken place on Twitter and it is a natural evolution to add TV premieres and live pre-shows to our video experience.”

A weekly live EMPIRE pre-show will run exclusively on Twitter all season-long, featuring cast members and guest stars from the series, as well as journalists and influencers, to discuss the series. Streaming throughout the season at 7:30 PM ET/4:30 PM PT to drive viewers to the drama’s new time at 8:00 PM ET, the pre-show will launch on Wednesday, Sept. 20. EMPIRE is the No. 1 most social broadcast primetime TV program on Twitter and Facebook combined* (based on average episodic total social interactions) and the No. 1 most socially engaging primetime broadcast drama**. Follow the series @EmpireFOX and join the discussion using #EmpirePreShow.

Marking a Twitter first, the premiere episode of GHOSTED will stream nightly at 9:00 PM ET/6:00 PM PT, from Thursday, Sept. 21 to Sunday, Sept. 24. The streaming episode will feature a special introduction by the show’s stars, Craig Robinson and Adam Scott, with a Twitter Q&A featuring members of the show’s cast to follow each night’s presentation. Follow the series @GhostedonFOX and join the discussion using #GhostedPremiere.

Tonight, beginning at 11:00 PM ET/8:00 PM PT, Twitter also will stream a marathon of Kaitlin Olson’s Top Five episodes of THE MICK. The episodes will stream with a special introduction by Olson, and will feature live Tweet participation by the show’s cast and producers. Follow the series @TheMickFOX and join the discussion using #TheMickBender.

Among broadcast networks, FOX has the largest social footprint with 225 million followers***.

Golden Globe-nominated EMPIRE continues to be one of the most popular and acclaimed shows on television. A powerful drama about a family dynasty set within the glamorous and sometimes dangerous world of hip-hop music, the show revolves around the Lyons and their media company, Empire Entertainment. In Season Four, EMPIRE’s explosive twists and turns resume, as Empire Entertainment embarks on a celebration of its 20th anniversary. LUCIOUS (Terrence Howard) makes his first public appearance after the explosion in Las Vegas, and all members of the Lyon family, as well as Lucious’ nurse, Claudia (guest star Demi Moore), have their own interests in Luciousregaining his physical and mental faculties. While Lucious struggles with his recovery, COOKIE (Golden Globe Award winner Taraji P. Henson) begins to revisit the most challenging time of her life – her 17 years in prison – in a series of flashbacks. Throughout the season, Lucious, Cookie and their three sons will be forced to take a hard look at their choices, both past and present, in order to secure their legacy and save their Empire. Season Four of EMPIRE premieres Wednesday, Sept. 27 (8:00-9:00 PM ET/PT) on FOX.

Starring Craig Robinson (“The Office,” “This Is the End”) and Adam Scott (“Parks and Recreation,” “Big Little Lies”), GHOSTED is a single-camera, live-action comedy about the partnership between two polar opposites – a cynical skeptic and a genius “true believer” in the paranormal – who are recruited by a secret government agency, known as The Bureau Underground, to save the human race. Also starring Ally Walker (“Colony,” “Sons of Anarchy”), AdeelAkhtar (“The Big Sick,” “The Night Manager”) and Amber Stevens West (“The Carmichael Show,” “22 Jump Street”), this heroic group of underdogs will look into “unexplained” activity in Los Angeles, as they attempt to uncover the truth and keep the earth rotating on its axis for at least one more day. GHOSTED premieres Sunday, Oct. 1 (8:30-9:00 PM ET/PT) on FOX.

Giving a whole new meaning to the phrase “dysfunctional family,” hit comedy THE MICK returns for its second season with all-new outrageous shenanigans. The series stars Kaitlin Olson as MICKEY, an unapologetic degenerate stuck raising her spoiled niece (Sofia Black-D’Elia) and nephews (Thomas Barbusca, Jack Stanton) amid the lap of luxury in Greenwich, CT. Although constantly pulled between enjoying her lavish new lifestyle and trying to control three monstrous children who have unlimited lines of credit, Mickey is now in it for the long haul. With the help of her on-again, off-again boyfriend (Scott MacArthur) and the kids’ live-in housekeeper (Carla Jimenez), she is determined to make it work, or, at the very least, black out during the parts that don’t. Season Two of THE MICK premieres Tuesday, Sept. 26 (9:00-9:30 PM ET/PT) on FOX.