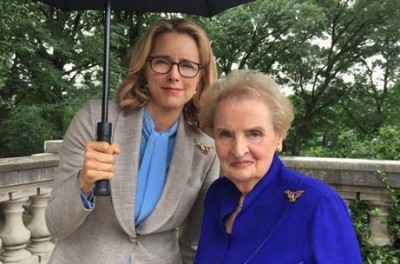 Former secretary of State Madeline Albright will guest star – as herself – on an episode of CBS’ Madam Secretary, this fall.

In the episode, Albright will provide the show’s Secretary of State, Elizabeth McCord, with advice on a situation that endangers her relationship with President Conrad Dalton.

July 14, 2015 – Former Secretary of State Madeleine Albright will guest star as herself on an episode of MADAM SECRETARY, airing in the fall on CBS.

In the episode, Albright advises Secretary of State Elizabeth McCord (Téa Leoni) on how to navigate a sticky situation with National Security Advisor Craig Sterling (guest star Julian Acosta), that is threatening to fracture her relationship with President Conrad Dalton (Keith Carradine).

Albright is the first woman to become the United States Secretary of State. She was nominated by U.S. President Bill Clinton on December 5, 1996, and was unanimously confirmed by a U.S. Senate vote of 99–0.  She was sworn in on January 23, 1997, making her the highest-ranking woman in the history of the U.S. government at the time.  Her term concluded on January 20, 2001.