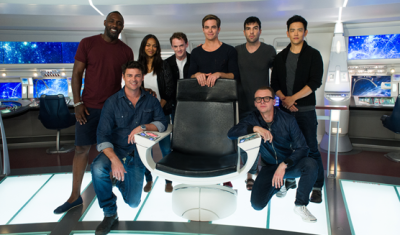 You can give to charity and win a walk on role on Star Trek Beyond!

The cast of Star Trek Beyond announce the Star Trek: To Boldy Go campaign, benefiting  nine global charities on behalf of the cast’s nine members. To win simply donate ten dollars through Omaze for a chance to win a trip to the set of Star Trek Beyond, hang with the crew and, if you’re the lucky Grand Prize winner, appear ina scene in the movie.

How does it work? Follow the jump for details – and an enthusiastic campaign kickoff video from the the crew of the Enterprise.

The campaign runs from July 14th to September 1st. Star Trek Beyond is slated to premiere on July 8, 2016.

Beginning Today, Fans Can Visit Omaze.com/StarTrek to Enter for a Chance to Win!

HOLLYWOOD, CA, JULY 14, 2015 – In an unprecedented event, the cast of the Star Trek film franchise has created a unique philanthropic initiative in partnership with Omaze. The Star Trek: To Boldly Go campaign will support the cast’s personal selection of nine global causes, which will each receive equal portions of the funds raised when fans enter for a chance to win a walk-on role in director Justin Lin’s Star Trek Beyond, the third film in the blockbuster franchise, released on July 8, 2016. The campaign runs from 12:01 a.m. PST on July 14th until 11:59 p.m. PST September 1st.

To coincide with the campaign’s launch, cast members John Cho, Simon Pegg, Chris Pine, Zachary Quinto, Zoë Saldana, Karl Urban, Anton Yelchin and Idris Elba recorded a special video message on the iconic Starship Enterprise bridge set. The video, released today, kicked off production and features the cast inviting fans to make franchise history as the first fans to ever win a walk-on role in a Star Trek movie. For each $10 contribution made through the Omaze fundraising platform, eligible participants will be automatically entered for a chance to win this once-in-a-lifetime experience.

The Star Trek: To Boldly Go Grand Prize winner and a guest will:

The Star Trek: To Boldly Go Crew will:

“Omaze is excited to bring this truly once-in-a-lifetime experience to Star Trek fans around the world,” said Ryan Cummins, Co-Founder and Co-CEO. “We are proud to give fans the chance to live out their dream experience while simultaneously helping nine great causes. By allowing anyone to enter for just $10, we are seeing the power our community has in making an impact around the world.”

By donating directly to Omaze.com/StarTrek, fans will be supporting these nine global causes:

Visit Omaze.com/StarTrek to learn more about this new initiative. “Live long and prosper.”

No purchase necessary to enter or win.  Void where prohibited.  Must be at least eighteen (18) years of age or the age of majority in your domicile, to enter and a resident of Argentina, Austria, Canada, Cyprus, Estonia, France, Germany, Greece, Hungary, India, Ireland, Japan, Latvia, Lithuania, Mexico, Netherlands, Philippines, Portugal, Romania, Russia, Slovakia, Slovenia, Spain, Sweden, USA, or the UK, and not a resident of Belgium, Italy, Malta, Singapore, or Thailand.  Residents of Australia, Brazil, China and the Republic of Korea are not prohibited from participating, but local rules and laws may restrict or prohibit the award of certain prizes or impose additional restrictions on participation.

Rewards are separate from sweepstakes prizes.  Rewards are limited in quantity. Odds of winning depend on number of entries. For free entry: (i) send post card to Sponsor at P.O. Box 866, 9942 Culver Blvd, Culver City, CA, USA 90232 by applicable mail date; or (ii) visitwww.Omaze.com/StarTrek.  Entrants may receive additional entries via Facebook.  Maximum number of entries: 1,000,000 per Entrant.  Travel and accommodations are at Sponsor’s discretion and subject to availability and change.  Winner and Guest may be required to pass a background screening or security check, to receive the prize and/or reward. Visa conditions may apply. All taxes are Winner’s responsibility. Not sponsored, endorsed or administered by, or associated with Facebook®.  Residents of certain territories may be required to successfully complete a trivia question to qualify.  For full entry requirements, details, limitations and restrictions see Official rules at www.Omaze.com/StarTrek. Sole Sponsor: Omaze, Inc., P.O. Box 866, 9942 Culver Blvd, Culver City, CA, USA 90232.