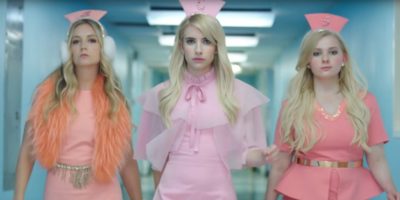 When the former Dean Munsch decides she wants the Chanels to ditch school and be medical students in her hospital, of course they’re going to jump at the chance.

After all, as Chanel Oberlin notes, in the age of the internet, ‘anyone can be an MD!’

The cast of Scream Queens: Season Two talk about the new season in a freshly released video you can find just after break. Scream Queens returns to FOX on Tuesday, September 20th.

The cast of SCREAM QUEENS give us our first inside look at season 2!

From award-winning executive producers Ryan Murphy (“Glee,” “American Horror Story”), Brad Falchuk (“Glee,” “American Horror Story”) and Ian Brennan (“Glee”), Season Two of SCREAM QUEENS graduates from the college campus and into an all-new location, as a terrifyingly funny murder mystery will begin once again. This time, the show will be set in a hospital, where some of the most fascinating and bizarre medical cases are under observation. Casting to be announced at a later date.