Entertainment News for The Rest of Us
Michelle Alexandria
Hollywood Insider, Television 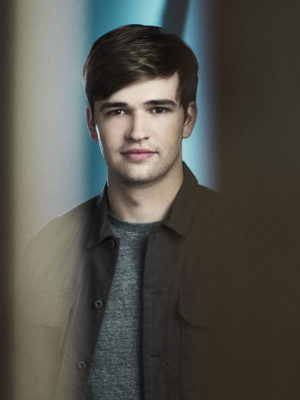 BEYOND – Freeform’s “Beyond” stars Burkely Duffield as Holden. (Freeform/Nino Munoz)

Burkely Duffield has one of those everyman faces. The 24-year-old Canadian actor has started to string himself an impressive list of credits that include appearances in Minority Report The TV Series, Warcraft: The Beginning, The Tomorrow People and Supernatural. He’s now getting his big break heading up Freeform’s Sci-Fi series Beyond. If Stranger Things and Kyle XY had a baby it’d be Beyond. Beyond’s has a special 2-hr premiere Monday, January 2, 2016.  The entire series is also going to be streaming on Freeform’s App after the special premiere. I’m not clear on if it’s going to be all 10 eps or will just be weekly.

The show tells the story of Holden, a 13-year-old boy who has a strange accident that puts him in a coma for 13 years. When he wakes up the world around him has changed and he discovers he has powers that he doesn’t understand and people are after him. I recently did an exclusive interview with Burkley and it went like this.

Can you talk a little bit about Holden and what makes him tick?

Holden is a boy who wakes up from a coma and he has to discover who he is. He missed those defining years of his adolescence and you will see him learning and growing a lot during each episode and overall through the season! He is also trying to get a handle on the supernatural abilities he was woken up with and figure out what they mean.

The pilot had a really cool Stranger Things/Starman vibe to it, but became something completely different towards the end. Can you talk a little bit about how you feel about the inevitable comparisons?

With a completely outside view, I do see how those comparisons can be made and those projects including ours have a similar “Spielberg-ian” sort of vibe. But once you do start our show, I have no doubt that Beyond will take you on a completely unique rollercoaster and those similarities will quickly fade away!

The 80s and 90s seem to be making a come back. What is it about those two decades that everyone loves?

I think the nostalgia of the 80’s and 90’s is definitely a big pull to audiences which is a major reason for the comeback! As well, I think it’s a very fun and distinct feel you can play with on screen, and that “feel” seems a bit different than what we are used to nowadays and stands out.

You been in several big Sci-Fi/Fantasy projects including Warcarft, Minority Report, Supernatural, etc. Is this a genre you are pursuing or are you just ending up in these projects.

I personally LOVE Sci-Fi/Fantasy movies and TV shows as a viewer! I don’t specifically seek out only these types of projects though and I always love to expand and try all types of roles which is a fun part of my job! But in saying that, I do love being a part of the Sci-Fi genre I admire, and it is such an amazing experience to bring a character like Holden to life!

What is it that attracts you to these type of projects?

I think the mix of reality and elements beyond reality are ingredients for any number of cool and original projects! As for our show, being able to play a character who is just a regular guy who is put through these extraordinary circumstances and given these extraordinary abilities was a true privilege to act out his journey.

BEYOND – “The Man in the Yellow Jacket” – Holden tries to learn more about his new enemies in a new episode of “Beyond,” MONDAY, JANUARY 16 (9:00-10:00 p.m. EST) on Freeform. (Freeform/Katie Yu)
ROMY ROSEMONT, BURKELY DUFFIELD

I have to ask what is your idea of the perfect sci-fi/fantasy TV Show and movie?

What is my perfect idea of the perfect Sci-Fi TV or Movie? Easy. Beyond! And you’ll just have to watch to see for yourself why it is!

What is it like being on a big tent pole film like Warcraft to starring in a what ABC Family hopes will be a “tent pole” TV Show?

It is such an incredible experience and I feel unbelievably honored! To be able to see these projects take flight is extremely cool and I am just enjoying the ride!

You’ve always played the supporting role, how are you managing the transition to carrying an entire production on your shoulders?

There is definitely a responsibility being the lead but I take that with pride! I have been working hard to have the opportunity to shoulder the extra weight and I wouldn’t take anything away from that! Every day on set was a fantastic day, and I can only hope to continue that responsibility into the future! 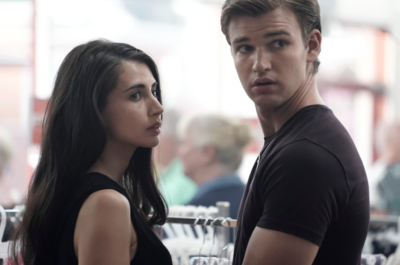 Did you do any research for this project and if so, what kind?

I did do some research of my own as well as collaborating with our talented directors and writers to really try and keep Holden as innocent and “young” as possible when he first enters back into the world after he wakes up from his coma. So I reflected on my own experiences growing up, as well as watched projects I felt had similarities and I could draw inspiration from.

What was your hardest, favorite and least favorite scenes to shoot?

There were A LOT of favorite scenes I had to film, from cool stunt work, to fun green screen, to really moving emotional and dramatic scenes between characters! But I can say that the night rain sequences we shot were especially hard and sometimes my least favorite because of the physical endurance needed.  But also those are some of my favorite scenes to watch because of the intensity and how cool they look on screen!

What do you hope or think fans will take away from this show?

I hope fans will watch our show and take away a story of a boy who is growing up! He meets some intriguing people on his journey and is put through some unbelievable struggles, and I can only hope people will enjoy watching the show as much as we enjoyed making it!

If you were Holden, what modern invention would you most be fascinated by and why?

If I were Holden, I think an Iphone would fascinate me the most! I remember growing up and you would need a dozen different gadgets and pieces of technology to do what we have in one device in the palm of our hand! So I think that would blow my mind!

Is there anything you personally brought to the role that wasn’t in the script?

If I did, I hope it was in a good way! It’s hard to critique my own performance and really everything I do onscreen is a collaboration between myself, the director, the producers, and the writing team, so I think cumulatively we tried to make Holden as genuine as possible! I can only hope that I helped craft the character that I love to play, and put in some of his “heart” that you’ll see on screen!