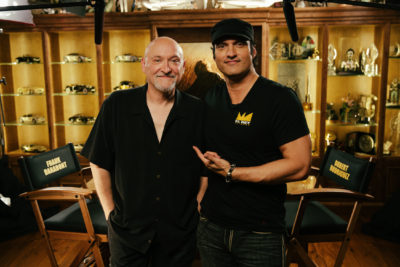 Join host Robert Rodriguez as he explores the film careers of these two acclaimed directors  on Sunday, September 25th (8/7C). For more, follow the jump.

“I spent seven years walking into offices trying to convince people that yes, a zombie show could be successful. It took seven years.   It was quite a Willy Loman experience.” Frank Darabont on “The Walking Dead”

“As a director you have to live and breathe that thing and be completely immersed in what you are doing to the exception of everything else.” Jon Favreau

Special To Premiere on El Rey Network on September 25th at 8:00pm

This programming event begins with Robert Rodriguez and writer, producer, director and three time Academy Award® nominee Frank Darabont discussing Darabont’s craft and career spanning over 30 years. He reflects on his journey to success beginning as a set dresser and struggling writer to creating the critically acclaimed works The Shawshank Redemption, The Green Mile, The Walking Dead and Mob City.

The second interview features Jon Favreau who recounts his journey from aspiring actor and comedian to widely successful blockbuster director.  Favreau reveals how his creative vision has developed over the years, made visible through his diverse filmography ranging from Swingers, Elf, Iron Man, Chef and his latest movie The Jungle Book.  They discuss how each of his films demonstrates his unique ability to merge comedy and a sense of humanity with visually stunning and technically innovative blockbuster films.

“Frank‘s and Jon’s films are so distinct because of their expert use of specific styles.  The undercurrent of comedy in all of Jon’s films is truly inspired and the use of suspense and horror in all Frank’s films is spectacular,” said Rodriguez.  “I love making ‘The Director’s Chair’ because audiences can learn so much about the directors whose work I’ve always admired.”

“The Director’s Chair” is a series of specials featuring the industry’s most cutting edge directors as they engage in a revealing and unexpected exchange about the world of filmmaking. The series provides access to one-on-one interviews between Rodriguez and some of cinema’s most iconic filmmakers. Past guests have included John Carpenter, Francis Ford Coppola, Michael Mann, George Miller, Guillermo del Toro, Robert Zemeckis and Quentin Tarantino.