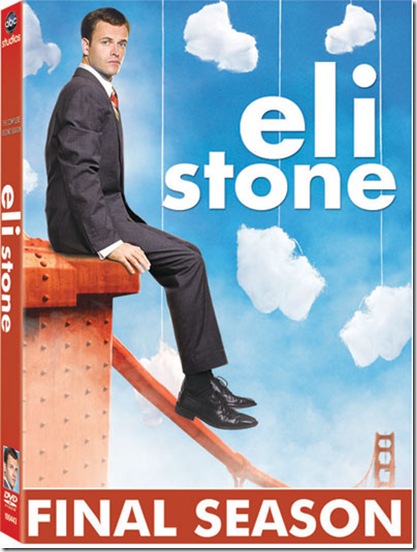 One of the best casting decisions was Sigourney Weaver as the psychiatrist who has to sign off on allowing Eli to return to practice after he comes out of his coma in the season premiere. Weaver’s character is known only Recertification Therapist, and so she is – on so many levels.

Debrah Farentino also stands out in the recurring role of Jordan’s [Vincent Garber] soon-to-be-ex-wife, Ellen, and Katie Holmes’ appearance as Active activist Grace Fuller [in her character’s eponymous episode] sets up an arc that plays out extremely well in the series finale.

In playing intriguing variations of a theme, a number of Eli’s visions appear to telling him not to take a certain case [Unwritten]. Ongoing plot arcs include a schism in the law firm and an acrimonious split; the mystery of Eli’s father’s [Tom Cavanaugh] notebook, and Eli’s need for knowledge leading him to an acupuncturing who will use forbidden techniques to help him learn more about specific visions.

Even though Eli Stone took an intriguing [and frequently weird] look at the problems of being a prophet in a land that would no longer recognize one, it did so with genuine wit, warmth and intelligence. The series finale, Flight Path, found Eli becoming at peace with his gift – and tied together a couple of important plot points.

In Eli Stone, series co-creators Greg Berlanti and Mark Guggenheim created a unique character for a unique show. Very little of the series rang false – a big thing when tackling concepts like the existence of God and prophets. Of the thirteen second season episodes, my personal favorites are the ones mentioned above, and Tailspin, in which Eli’s acupuncturist/confidante, Dr. Frank Chen [James Saito]. Other important arcs include the romance between Jordan’s daughter, Taylor and Matt [Nathan Stone] – a kind of “anti-Eli;” the odd relationship between Eli and Maggie [Julie Gonzalo], and the ongoing efforts to keep Jordan’s firm [minus the two partners who split, raking with them most of the former firm’s clientele] from sinking.

Features include: Dancin’ in the Streets – a featurette on the season’s song and dance sequences; Good Morning, Eli with Sam and Julie – described as “a fun look at the morning rituals on the Eli Stone set with Sam, Julie and the rest of the cast; Circular File – pretty average gag reel, and Deleted Scenes.

One thought on “DVD REVIEW: Eli Stone Soars in Season Two But It’s Too Late – Thank Whomever for DVDs!”