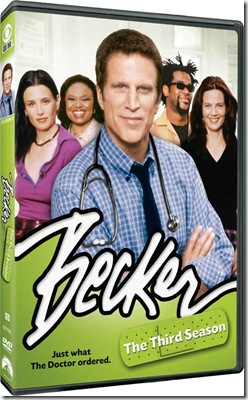 I have no idea if David Shore was influenced by Becker when he was creating Dr. Gregory House, but as I screened the third season of Becker, I couldn’t help but think that it wouldn’t have taken much to turn Ted Danson’s second hit series [six seasons] into a drama.

Dr. John Becker [Danson] is about as sunny as smog. He is easily angered, self-involved and has no problem expressing himself forcefully. His practice, in a slightly lower-class neighborhood, is a constant source of irritation – as is his apartment building. His best [and only] friends – greasy spoon owner Reggie [Star Trek: Deep Space Nine’s Terry Farrell] and blind magazine vendor Jake [Alex Desert] – find his constant state of fury both amusing and irritating [in Pretty Poison, Reggie, in a moment of frustration inquires, “Do you even listen to yourself talking?”]. Then there’s the weasely Bob [Saverio Guerra], a constantly horny dolt who gets himself hired as the super in Becker’s building and frequently refers to himself in the third person.

The third season finds Becker dealing with such annoyances as having his office vandalized [and the case investigated by a dim cop who develops a thing for his office worker]; the loss of electricity and a dripping tap – along with banging on his wall by his neighbor [or so he thinks], and the inability to get through a movie without interruption from members of the audience.

At work, Becker keeps it together because of his efficient nurse, Margaret [Hattie Winston] rather than his slacker office worker, Linda [Shawnee Smith]. Margaret keeps the wheels turning; Linda watches soap operas and misunderstands the simplest instructions. Becker’s patients range from a guy [Lavar Burton] who’s trying to get his brother coverage to treat his MS, to a guy who hurts his back in the middle of taking off a t-shirt.

The eps of the season are The Wrong Man and Pretty Poison, in which Becker is reunited with his long-lost love from Harvard, Megan [Jaclyn Smith]. In The Wrong Man, he’s tempted to spend the night with her even though she’s married [and his conscience manifests itself in the form of people in his life]; in Pretty Poison, his friends at the diner realize she’s nuts before he does [and he’s already lent her his credit card!]. Both eps were written by Mad Men creator Matthew Wiener and show his ability to get to the essence of a character.

Becker is not Cheers, which is why Danson took on the role, but it’s witty and edgy – at a time when edgy wasn’t a big thing. While Terry Farrell was aboard as Reggie, the banter between her and Becker were one of the spines of the show [the other being the Becker-Margaret relationship]. In season three, the series may have reached its pinnacle.