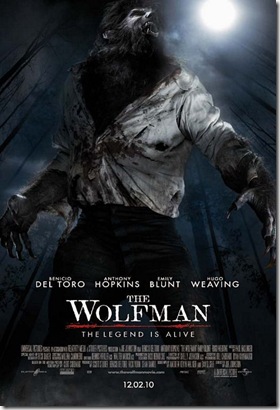 After a couple postponements and a complete makeover in the editing room, The Wolfman finally reached screens this weekend. Not worth the wait.

There’s a lot of grim, grey weather in The Wolfman – and the clouds really only seem to part on the full moon – as if obscuring the moon’s rays will somehow prevent the change from taking place. There are great makeup effects by Rick Baker, but instead of atmosphere and character, the script – by Anthony Kevin Walker and David Self – gives us unremitting grey and jump moments.

Benicio Del Toro’s Lawrence Talbot is little more than soulful looks and pouts, while Anthony Hopkins plays Sir John Talbot with little fire. When he says he’s already died, it’s hard not to believe him – his performance is one-note, sotto voce. The various villagers and peasants – and the local mad dog priest – are almost in a different world. They are just about too over the top – they’re almost like cartoon characters out of Scooby-Doo!

The story closely follows the original in most respects. Talbot returns home because of a letter from his brother Ben’s [Simon Merrills] fiancée, Gwen Conliffe [Emily Blunt] informing him that Ben has disappeared and been missing for weeks. He returns to discover that Ben’s body has just been found – and it’s horribly mutilated.

When he disobeys his father and visits a Gypsy camp on the night of the full moon, a creature attacks the camp and, while many perish, he is only wounded because the creature is driven off by gunfire. His rapid recovery earns him the fear of the locals and a visit from Inspector Abberline [Hugo Weaving], the Scotland Yard man who failed to solve the Jack the Ripper murders.

In Blunt and Weaving, the film has its two bright spots. Blunt’s caring, compassionate Gwen is a beacon of hope and Weaving’s sheer intensity as Abberline burns brightly. It’s a shame that their work is lost in a morass of relentless grey that makes it almost [but not quite] impossible to distinguish day from night [except in one lovely scene where Talbot is carted off to an asylum on the only day in the film in which a blue sky occurs – where his “delusion” proves to be something other than what the hospital’s staff might have imagined. One might think director Joe Johnson was going for irony, but it’s even odds that it was due to the shooting schedule.

The original Wolfman [starring Lon Chaney Jr.] is, by far, the superior film for atmosphere, character and fun. If you accept it on its own terms, it’s scarier, too.