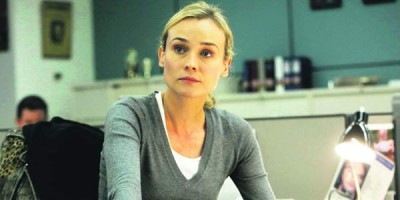 We are back with more interviews from the set visit to “The Bridge”! Our first featured interview was with Demian Bichir. We return with a second featured interview with none other than the wonderful lead actress Diane Kruger who plays El Paso homicide detective Sonya Cross.  She met with journalists and bloggers to talk about the season of “The Bridge”, which returns for a second season on July 9, Wed. 10/9c on FX.

Diane Kruger is a talented German actress and former fashion model. She moved from Germany to Paris to pursue fashion modelling.   She represented Germany in the Elite Model Look.  She later stopped modelling to focus on her acting career.  Starting in French films, she gradually expanded her repertoire to include “Troy”, “National Treasure”, “Inglorious Basterds”,  “Mr. Nobody”, “The Host”, and “Unknown”.

We visited the costume department and saw Sonya’s sister’s jacket.  How does it make your character feel to wear that jacket?

It was important to me. One of things that struck me from the original show was that Saga had a distinct look to her.  She was different.  She drove a vintage porsche.  She had a long coat on.  She also had Asperger’s which set her apart from the get go.  When you saw her, she was visually off and different from what you would expect a cop to wear.  That was where the idea of the jacket came in.  It was my dead sister’s.  What would be visually different?  It was really Anna ‘s idea.  It was a labor of love to do that. 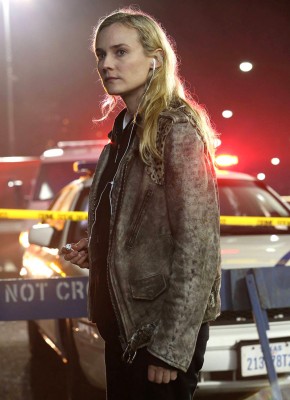 Can you tell us about the changes in season 2?

It is a grittier show compared to the first season.   This year, there’s a lot of killers & lots of murders.  The story is more complex. Sonya’s personal life is a big part of this season.  It’s a very dark time for her.  All the characters are exploring more.

Your autism consultant Alex Plank was on set.  Can you tell us about the relationship?  Did you need him to be on the set every day?

It has evolved.  Alex was on set every day in season 1 and I spent many months with him before we started shooting last year.  He is still a consultant on this show.  This year, he is still involved but not on set every day since I know so much more now.  When I have a question, I call him.

Are they going to reveal this year that Sonya has Asperger’s?

No.  In season 1, like the original show, it is never addressed.

How do you feel about how  people were talking about Asperger’s even though it wasn’t addressed on the show?

Clearly, there was something off with Sonya on episode 1.  People with conditions don’t necessarily go around saying “I have Asperger’s”.  We didn’t want that condition to become the focus. There are a lot of people who are not able to fit into what is socially acceptable.  She has this condition but she’s a great cop.  It is also an opportunity for me to raise awareness about Asperger’s and Autism.  Before, I didn’t know what Asperger’s was.  It’s great that the lead of a show is a complex character.  She’s a well rounded character.

Would you say Sonya, along the same lines of the other question, is a role model?

I don’t have Asperger’s so . . .  for me to say how I could be a role model.   How could I know?  It is great that autism has come on board.  I try my  hardest to be accurate on the show.  It is a hard character to write for.  It is a lot of effort to be able to find outlets for her to make the character evolve.  People with Asperger’s can evolve over time.  For example, Alex doesn’t overcome it but he can control it. 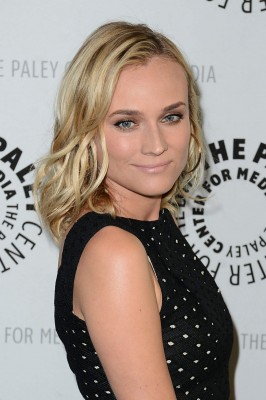 On season 1, we see Sonya is not afraid to explore her sexuality, but she never explores her romantic side.  Is that something you will go into as the season progresses?

We are going to try but it is difficult for people with Asperger’s to make real connections with people.  They don’t read signs very well.  If she met a guy, I’m not sure she would recognize it as a romantic.  I think she has a difficult time with social situations.

When someone has a character as complex as Sonya from 1st to 2nd season, actors talk about adding more depth to the character. Is there anything you can place onto Sonya personality wise that you weren’t able to in the 1st season?

In season 1, she has Asperger’s. She’s a good cop.  This season, we will know all the people in her life.  We know about her sister.  Now, I can open up the box.  I don’t have to explain anything.  The writers don’t have to make it clear in every episode that Sonya has Asperger’s. The focus of this season is to show her and her private life.

What is the difference between being in the sound stages and being on location?  Are you actually going out on location?

I love being on location.  It’s not always in the most glamorous places. But July  in the desert . . .  Yesterday it was 110 F and I was in a leather jacket! The stages here are great.  We moved to the sound stages so work is easier.  I prefer to be in a gritty environment because it helps when performing a scene.

How do you think we are going to see her interact with Marco?

I don’t know.  Our relationship is getting tested.  Sonya has very strong physical ideas.  She’s not very good with grey areas.  She always tells the truth.  Marco doesn’t always tell the truth and she suspects he’s not a good cop.  There is a fallout.  She evolves in the sense that she has to give it up for the greater good of a situation.  Things are not so black and white for her anymore. 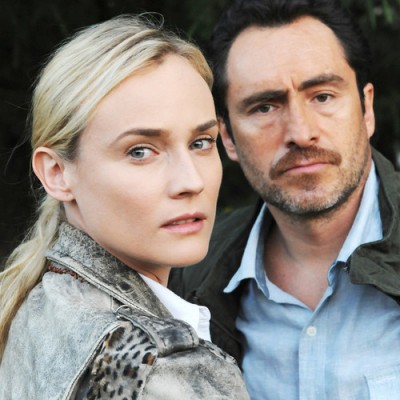 Other than the jacket, can you talk about costume decisions?

In this case, I’m definitely not cute.  It’s fun because she doesn’t want attention  because of her upbringing.  She never wanted attention. She didn’t want to be looked at.  A lot of my clothes are the same.  She just wants to fade away.

I wanted to ask about your hair and makeup.

I feel they are very sad that all they get to do is gritty hair, pony, and mascara (laughing).  I worked with Kris Evans on “National Treasure” way back when.  I suggested her for this job and it’s great to have her 10 yrs later.  Nani was in season 1 and created the character.  She is a great hair stylist.

Were you a fan of procedurals before you took this job? 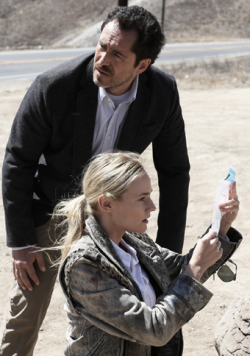 I missed something with the drawings in episode 1.  Can you explain how she got those and why did she put them up?

Jim Dobbs killed my sister.  Hank shot him and missed and left him mentally handicapped. Jim keeps on drawing and I visiting him, hoping to get an answer to why he picked my sister. I’m trying to find out what is going on in his head. I collect all these drawings that he makes.

At this point, it’s that she was never able to move on.  Her sister was the only thing she had.  Her loss is something she still can’t forget or forgive.  She is searching for answers.  It is ongoing thing for her.

What do you look for when you get scripts? What is the difference between a tv script and movie script?

It’s an exciting time for tv.  I never considered doing television before because of the time commitment.  I didn’t want to shoot 9 months out of the year for one character in a location I didn’t want to live in.  13 episodes is 4 months, like a long movie. You get to really get into the character. 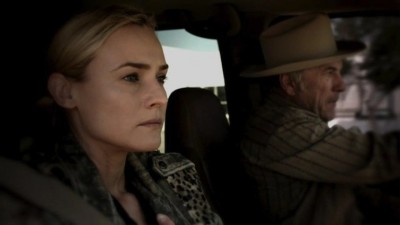 Have you researched into police work or politics on the border?

I walked the bridge.  I’ve been to El Paso. I read about it.  For police work, we have an advisor who teaches us about gun training which to be honest I’m least interested in.  I nearly killed a New York Times reporter by dropping a gun from its holster.  She wasn’t happy about it  It’s gotten better for season 2.  Advice I got is  “It’s not Charlie’s Angels”!  It’s getting better. (laughing)

What is favorite part of the show? What do you love about it?

I like the creative process. The speed of things. You’re always thinking and always plotting.  It requires a lot of attention to details.  You did something in episode 2, and now you’re in episode 7.  you have to remember a lot of things.  I love working with Elwood.  It’s fun to pick his brain.  He’s a very good leader.  He’s a voice for the show.  It’s been fun.

Which episodes are you looking forward to for the audience to see?

Number 1 is very strong.  I really like 4 and 7 is excellent.  I haven’t seen past 7.  It’s not that the others aren’t good.  I just  remember watching 7. It’s not even about Sonya.  It’s just how it’s shot.  A lot of the Mexico stuff this year is thrilling.  We have wonderful directors this year.  It’s not so classic so you’ll see that as a different show.

What has been the most challenging thing to shoot this season?

In one of the episodes, my character got kidnapped and was left to die in the desert. My character was walking for hours.

Was it taking a toll on you emotionally?

I came home that night and drank 3 gallons of water and was a vegetable on my couch for the rest of the night, but it didn’t take an emotional toll.

Has playing this role affected roles you choose in the future?

Yes.  I want characters that brings something to the table instead of the damsel in distress.  It is okay when you’re young, but becomes boring after a while.   FX has been gracious to let me do a movie in the beginning while preparing for this.  I did an alcoholic trophy wife and 80’s perm and went  straight into Sonya.  There was a few weeks overlap.  It’s been fun. 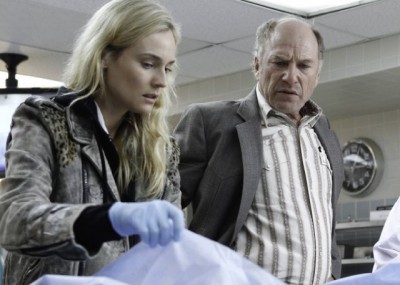 Are there any specific directors you would like to work with?

Michael Haneke.  I was on the Canne Jury when Amor came out.

Do you have a philosophy in life?

Not really.  I’ve run away all my life from any structure and rules.  i guess my only rule is I don’t want to miss out on anything so life doesn’t pass me by.

Do you remember your first ever on-screen role on screen?

I was in drama school and i played a girl who got out of a car was in a bad french tv show.  I had to confront a guy who hit my car.  I lied and didn’t tell them that I had never been in front of a camera.  After take 2, the director figured it out.

If there is another job you could do outside of acting, what would it be?

Party planner, Wedding planner, chef, jewelry designer, serial traveler.  I don’t know.  The list goes on.  I love it all. Even when you prep for a movie, I sometimes think, maybe I should do that for a while.”  I think, “Why not?”

For our viewers who have not seen any episodes of season 2, what can we expect and what can we be excited about ?

It is a dark show this season.  You will enter a world that is exciting and scary and sometimes funny.  I’m proud of the show this year.  It is the show I hope it could be. 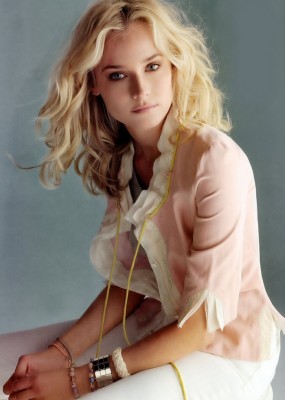