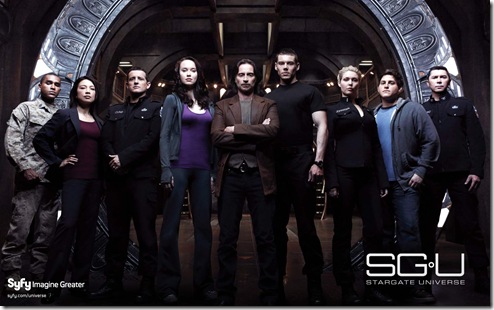 This Monday, May 9th at 9PM on the Syfy Channel, Stargate: Universe airs it’s final episode. It’s also the day that the long running Stargate franchise seemingly comes to a close.

Stargate Universe premiered back in October 2, 2009 with the pilot episode in which an attack on a secret off-world base, Icarus by a rebel organization forced the remaining survivors  to flee onto an Ancient built ship named Destiny. Destiny had been launched millions of years ago by the same race that built the Stargates. Hoping to find a way back home, Colonel Everett Young (Louis Ferreira) and Dr. Nicolas Rush (Robert Carlyle) formed an uneasy, tension filled alliance to find out the ship’s true purpose and to find a way back to earth.

Now, forty episodes later, the passengers and crew of the Ancient built ship Destiny face their final challenge in the episode titled Gauntlet. Relentlessly pursued by drone ships from an alien race bent on destroying everyone on board Destiny, the crew faces the very real possibility they may never live to see home again.

While Stargate: Universe doesn’t have the infamy of being the shortest lived version of a Stargate spawned series – that title belongs to the animated series, Stargate: Infinity– it certainly didn’t achieve the success that was expected of it by long time Stargate Executive Producer, Brad Wright. As a viewer, I have to admit I was surprised that this addition to the Stargate franchise didn’t make it very far.

More after the jump. 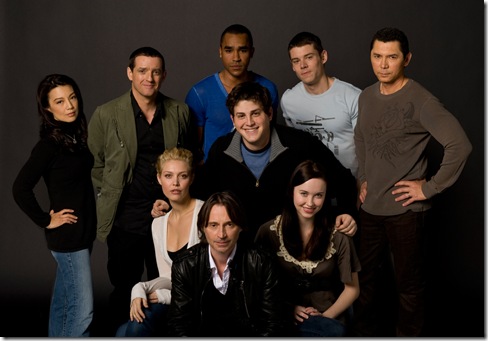 Brad Wright has been quoted as saying that he thinks the move from the prime spot of Friday night to Monday night on the Syfy Channel hurt the series in terms of viewers who were used watching a Stargate series on Friday night. More controversially, he also attributed the cancellation of Stargate: Universe to what he said were fans Stargate: Atlantis becoming angry enough over what they perceived to be slights against that series, that they deliberately hurt the chances of Stargate: Universe to be successful. In counter, fans say that while they did feel that Stargate: Atlantis got a raw deal, they believe Stargate: Universe failed because it deviated from the successful formula began by the long running Stargate: SG1.

I can’t speak with any authority or agreement with either side about these issues cited by Wright and the fans. All I can say is that I was a big supporter of Stargate: SG1 and stayed with it for all ten years and two movies – through good and bad. The series, which was a spin off of the moderately successful Dean Devlin/Roland Emmerich movie, Stargate which starred Kurt Russell as Colonel. Jack O’Neil and James Spader as Dr. Daniel Jackson. The series took up after events of the movie. Russell and Spader were replaced by veteran TV action star Richard Dean Anderson and new comer Michael Shanks. Two new characters were added into the mix – Major Samantha Carter (Amanda Tapping) and Jaffa Warrior turned Earth ally Teal’c (Christopher Judge) – and the formation of SG teams were created. It was my favorite show for a very long time.

As much as I was entertained by and impressed with Stargate: SG-1, I was  left feeling the opposite with Stargate: Atlantis. Neither the premise nor the characters appealed to me or became interesting enough to follow the series with any dedicated interest. To be blunt, it bored me and I switched it off. That didn’t stop Stargate: Atlantis from being successful enough to run for five years.

It was my loyalty to Stargate: SG1 that was the basis for my giving the new series, Stargate: Universe, a chance. I have to agree that it had just a little bit of the basic formula from the original series. I have to agree that it had something new and different, and yes, daring to it. I liked the infusion of the old with the new and how the series kept itself connected to it’s roots yet wasn’t afraid to follow a different direction with the characters.

As a viewer, I saw it as a refreshing change of pace and not something trying to be another ‘wannabe’ rehash of Stargate SG-1.  That was the thing that most turned me off about Stargate: Atlantis. It was too much like SG1 in terms of characters and how they met and dealt with adversity. The cast of characters for Stargate Universe didn’t automatically start out untarnished or heroic. They were characters with interesting flaws and dynamics going on between them. They had to overcome the obstacle of their own selfishness, egos and prejudices to learn to work together instead of them being automatically able to do that.

Rush (Robert Carlyle) was abrasive and arrogant, yet unlike Rodney MacKay (David Hewlett) he didn’t have a cutesy, childlike personality that made him comic relief. He wasn’t altruistic like Daniel Jackson (Michael Shanks). Rush was an adult with an intense drive to achieve his own ambitions coupled with an intense desire for discovery.

Colonel Young (Louis Ferreira) is not the larger than life ‘hero soldier’ of his predecessors. He’s a man who seems to have an uneasy truce with the mantle of leader that has been thrust on him in this crazy situation. 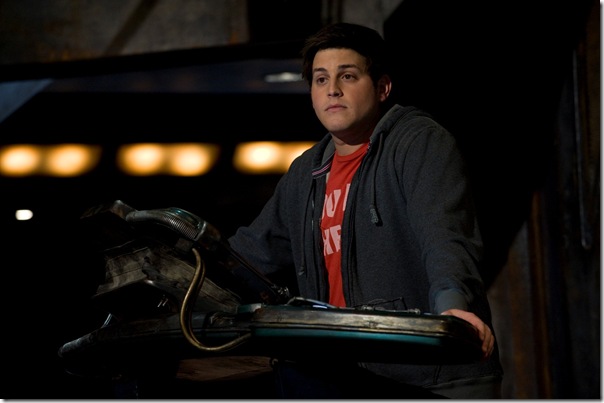 Of all the characters in Stargate: Universe, the one I liked the most was Eli (David Blue). Eli seemed to be an interesting mix of Daniel Jackson, but not a clone. Eli had his own personality and was a great counterbalance to the grim tension between Rush and Young. If nothing else about Stargate: Universe would have kept me watching, I would have stayed for Eli.

All of this is not to say that I didn’t see a problem in the presentation of Stargate: Universe. If I have to pinpoint one thing that might have been a fatal downfall, it was the fact that this series lacked one important thing that every Stargate series should have. It lacked a buddy dynamic. This is the one thing I wouldn’t have minded seen duplicated in Stargate: Universe that was part of the heart of Stargate: SG-1. All of the characters in Universe seemed too much at odds with each other sometimes and the only relationships that seemed to form were romances. There was no buddy friendship forged by two strangers who seemed to be diametric opposites yet came together to create a synergy.

In my opinion as a viewer, this lack of a buddy generated synergy may have been what ultimately led to the far too early demise of Stargate: Universe.

With the cancellation of Stargate: Universe, a nearly two decades long era comes to an end. Back in April at the Creation Salute to Stargate convention held in Vancouver B.C., long time Stargate executive Brad Wright took the stage to address the audience about the future of Stargate as a franchise and what, to put it bluntly wasn’t coming next.

“We just recently found out that the Stargate: Universe movie is not going to happen,” Wright stated to the crowd that had gathered to hear him speak.  “It took too long and we just couldn’t get it together in time. The window has closed.”  Wright expressed sadness about this turn of events and the fact that after seventeen years working on one Stargate series or another, he was cleaning out his desk and moving on.

According to Wright several proposed Stargate SG-1 and Atlantis movies have been permanently shelved. As have  another movie project in the Stargate franchise that he had been working to get green-lit. Brad told the audience that there were scripts for the first two of those projects, tentatively titled Stargate: Revolution and Stargate: Extinction. The projects were completed and would have involved the cast of all three Stargate series.

Even as the upcoming final episode of Stargate: Universe marks the closing of the long running Stargate franchise, Brad Wright is optimistic about it not being all that final. “It’s a franchise. Stargate is not over.” He feels optimistic that somebody at MGM is going to be smart enough to realize that there is still a lot of power left in the gate and destinations left to explore.

I hope that this comes to pass, as I would hate to see it end this way. Yet honestly, as one who is on the viewer side of the fence, its also going to take something being offered that long time fans of the Stargate franchise can identify with as being Stargate and maybe not have any animosity towards over loyalty to a prior installment in the franchise.

Meanwhile, there is still one final episode of Stargate: Universe left to air. Below is a sneak peek clip of Gauntlet.