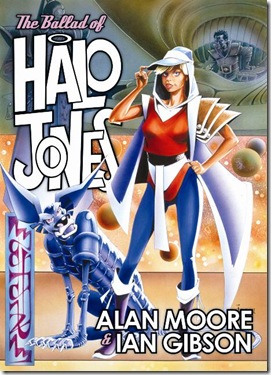 There are a lot of tough ladies in science fiction – Robert A. Heinlein’s Friday, Tanya Huff’s Gunnery Sergeant Torin Kerr, David Weber’s Honor Harrington – and I love them all, but when push comes to inevitable shove, I have to say that my favorite is Alan Moore’s Halo Jones – whose adventures in England’s legendary 2000 A.D. have been collected into graphic novel format by 2000 A.D./Rebellion A/S.

Who is Halo Jones [I hear you ask]?

She’s a dirt poor Hoopsider from Earth who comes from a neighborhood [Hoopside] – where the simple act of going shopping requires military-grade planning and split-second timing – who signs onto a legendary starship called the Clara Pandy as a hostess and embarks on a life of adventure with her faithful robot dog, Toby.

The Ballad of Halo Jones consists of three books, each chronicling a distinct of Jones’ life: as a teenager in the Hoop [a self-contained construct that houses New York’s poor, and floats off Manhattan] – this is where shopping is such an adventure]; Jones’ time on the Clara Pandy – where she experiences the two greatest betrayals of her life, and finally, her time in Earth’s Armed Forces, fighting ‘rebels’ in the Tarantula Galaxy.

Along the way, Jones stumbles into – and out of – adventures; from her shopping expedition with her Hoopside roommates Brinna and Ludy and Brinna’s robot dog, Toby; to dancing with the galaxy’s richest person and striking a friendship with the Clara Pandy’s Cetacean [Dolphin] navigator; to gaining combat experience before hitting Tarantula and fighting in a place where gravity wreaks havoc with time itself.

One of Moore’s greatest strengths is that he creates totally relatable characters within situations that could otherwise seem much less than plausible. Jones is one of his best, what with her naivete´ and enthusiasm for live that gets eroded before she finally finds herself again.

The world of The Ballad of Halo Jones is one that comes complete with a number of intriguing cultures and a cast of entertaining supporting characters – ranging from a mostly unnoticeable roommate to a military commander with tusks – in universe that comes with its own customs and slang [which Moore expects you to pick up as you go – as usual, for Moore, the reader is assumed to be both intelligent and observant].

Ian Gibson’s art is beautiful. It is created specifically for the black & white of the weekly 2000 A.D., so it’s a good thing that the graphic novel compilation hasn’t tampered with it by the imposition color. Gibson’s use of blacks and cross-hatching create effects that would be diluted by the addition of color. He also does something that you rarely see in comics – art that is simultaneously fluid and graceful, as well as lean and angular.

His layouts may be based on descriptions in Moore’s scripts, but they also feel like a combination of solidity and improvisation – as though he’s taken Moore’s input and then played with it in unexpected ways. The result is always striking – and frequently breathtaking.

While The Ballad of Halo Jones is an essential addition to Moore completists, it’s also a striking, highly entertaining contained work that will appeal to a wide spectrum of smart readers. As an introduction to Moore’s work, it is pretty much perfect.

There are script pages from Book Three, Episode Two, a Cover Gallery [which probably should have been in color] and brief bios of Moore and Gibson.

As for this review’s title, well… you’re going to have to read the book. Enjoy!