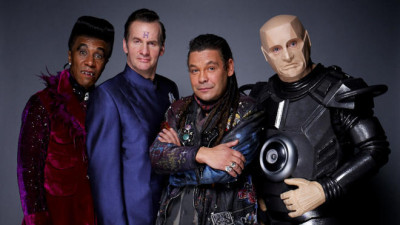 Lister, Rimmer, Kryten and Cat will be returning thanks to the solid ratings for Red Dwarf X. The only question is who will pick up the show for North America? It’s certainly done well here in the past, so it’s just a matter of time.

Check out the announcement from Dave after the jump.

Yes, you heard us right. Red Dwarf XI and XII will film back-to-back this autumn and will air exclusively on Dave in 2016 and 2017, reuniting Lister, Rimmer, Kryten and Cat for the first in three years. It’s been a long wait we know, but this has been news worth waiting for.

Red Dwarf has enjoyed huge success since first airing on BBC2 in 1988. Over eight million people tuned in for series eight, 11.5 million DVD’s and videos have been sold worldwide, it’s been seen in over 25 countries and scooped Emmys and British Comedy Awards.

2009’s Red Dwarf: Back to Earth – Dave’s first original scripted comedy – pulled in over 2.6 million viewers, keen to catch up with the four hapless space explorers as they returned to TV for the first time in decade. When Red Dwarf X came in 2012 viewers never dipped under 1.6 million.

Writer, director and mastermind of the cult sci-fi comedy Doug Naylor said: ‘everyone at UKTV has been so supporting of Red Dwarf from the start of their involvement with the show. [They] originally asked for more shows back in 2012 but frustratingly it’s taken until now to get our ducks in a row and all the boys available at the same time. Now they are, we’re all absolutely delighted.’

Don’t worry if you can’t quite handle the wait for the two new series. You can watch the entire Red Dwarf X collection right now on UKTV Play via iOS, Android, Virgin TV, YouView and at uktvplay.co.uk. The series will also be available as a box set on Sky Go and Sky set-top boxes.