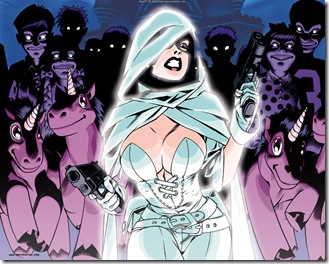 Once upon a time, Dark Horse Comics built an intriguing superhero universe based on the concept that its cities got the superheroes they deserved – thus the dark, corrupt Arcadia had the dark, scarred X busting crime, while the nigh-unto-utopian Golden City had Grace, an All-American Girl with Superman-like abilities.

Which brings us to the news that Ghost – one of that universe’s most popular characters – is getting a revival as a video game from Gamers Digital. It should be in stories in early 2012.

The title character is the literal ghost of a murdered journalist named Elisa Cameron – a supernatural being who had to solve her own murder. The title, originally written by Eric Luke – and illustrated by a number of artists – ran, intermittently from 1995-2004.

Given the nature of the character – and the book’s combination of supernatural and mystery elements – it’s a wonder that Ghost hasn’t been developed as a video game already.  Follow the jump to read the press release and check out a screenshot from the game – which should be in stores in early 2012. 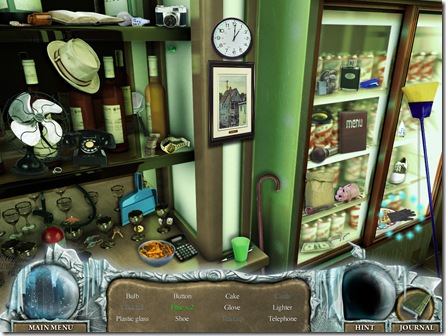 Ghost Will Be Available in Early 2012 For PC, MAC and iOS Platforms

CITY, STATE– October 13, 2011– Dark Horse Comics, in collaboration with Gamers Digital, is proud to revive the popular paranormal intellectual property Ghost, the comic book series that centers on Elisa Cameron who must solve her own murder. Ghost is a digitally downloadable first person mystery (FPM) game that will be available early 2012 for PC, Mac and iOS platforms.

“Fans of the Dark Horse Comic’s Ghost will enjoy the game and its story arc. Ghost fits perfectly within the comic book’s pantheon and provides fans with a satisfying experience from beginning to end. For gamers new to the intellectual property, Ghost will provide a mysteriously engaging storyline mixed with detective elements that any super sleuth would love to solve,” said Scott Zerby, president of Gamers Digital.

Ghost tells the otherworldly story of journalist Elisa Cameron who wakes in the alternative reality of Arcadia. Playing through the spectral eyes of Elisa, fans quickly discover that Elisa inhabits a realm between the living and the dead and that she is fully aware of herself and her surroundings. Even more surprising, her sister Margo can sense her. They both of them set off on an adventure to unlock the mystery of her murder.

Developed by Gamers Digital as a FPD game, Ghost features an immersive and entertaining experience for wannabe detectives. Players must carefully navigate through the city of Arcadia completing challenging quests, solving mini-games, collecting items in order to solve the mystery and possibly save the world in the process.