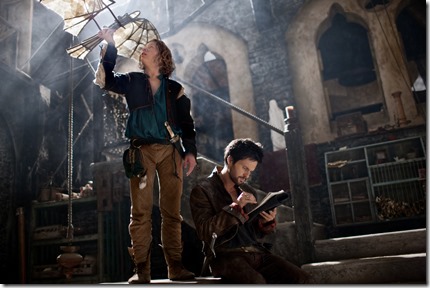 Leonardo Da Vinci was the man who caused the phrase ‘Renaissance Man’ to enter the lexicon. He was a painter, sculptor, mathematician, and inventor – and one of the best in history in every category. It’s a wonder that no one had ever seized upon his genius as the basis of a TV series, but until David S. Goyer (The Batman Trilogy, Man of Steel) came up with Da Vinci’s Demons (Starz, Fridays, 10/9C) no one had even tried. Their loss is out gain.

A mysterious meeting between two men – one apparently Middle Eastern, one very European; the assassination of the Duke of Milan; an experiment with a kite huge enough to enable a boy to soar above the ground; a beautiful model who bares her body only if the artist painting her will bare his soul; the most beautiful woman in Florence – and mistress to its reluctant leader; a secret Vatican archive; a secret brotherhood that keeps the reality of history and not just the version edited by the winners; a conspiracy at the highest levels of politics and religion; something called The Book of Leaves – all are elements that fit together in the very peculiar mosaic that is David S. Goyer’s Da Vinci’s Demons.

Much is known of the life of Leonardo Da Vinci – except for a five-year period where records are few and far between. It is in those five years that Goyer has set Da Vinci’s Demons – a time when Da Vinci (Tom Riley) was just coming into the peak of his powers. We see a young Da Vinci, with ideas pouring forth in such a rush that he must dull his mind with drink and drugs to keep from being overwhelmed by them.

This is a man confident enough to set his apprentice, Nico Machiavelli (Eros Vlahos) aloft on a kite shaped like bat wings; engineer a meeting with Lorenzo Medici (Elliott Cowan) by playing on the vanity of his mistress, Lucrezia Donati (Laura Haddock), and guard his ideas in chest rigged to explode if opened incorrectly.

This is a man who will not tolerate bullies; can wield two swords effectively (being ambidextrous), and argue philosophically with his latest model (who used to be in a convent before discovering she was too earthy to become a nun). 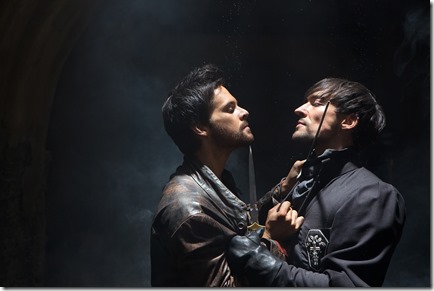 Supported by a dazzling array of actors, Riley makes Da Vinci an irresistible rogue with a demanding intellect and an emotional investment in everything he does.

Vanessa (Hera Hillman) might be the latest model to pose nude for Da Vinci, but I’ll bet she’s the first one to demand he bare his soul in rerun for her baring her body – she’s sweet and playful; earthy and innocent, and interesting because she can keep Da Vinci on his toes.

Haddock’s Lucrezia is as wily and manipulative as Da Vinci, and as forthright. Cowan’s Lorenzo may be reluctant to lead Florence, but he’s the kind of man who – once a situation is thrust upon him – will endeavor to do it as well as humanly possible. Al-Rahim, The Turk (Alexander Siddig), is suitably mysterious, intelligent and perceptive – he also has an almost supernatural air about him.

Even the apparent villains of the series are intriguing: Pope Sixtus VII (James Faulkner) is a homosexual pederast who is a ruthless politician as well as being the leader of the church, and Count Giralomo Riario (Blake Ritson), Captain-general of the Holy Roman Church kills easily though he might offer apologies if circumstances allow – and he is as smart as he is ruthless.

With all its intrigue, Da Vinci’s Demons could have been nothing more than a soap opera set in Renaissance Florence, but Goyer (who wrote and directed the premiere, The Hanged Man) has a knack for balancing history with fancy, and knows when and how to inject the slightest hints of the supernatural to keep his audience off balance. He also shows a decided lack of reverence for his characters and their times.

The result is a fast-paced hour that mixes all the pomp and grandeur of historical fiction with a sense of joyousness and fun that makes Da Vinci’s Demons a genuinely unique experience. The three episodes include in the press kit for the show maintain that balance equally as well.

I had a great time watching the first eps of Da Vinci’s Demons. It is one of my favorite new shows of the spring/summer.