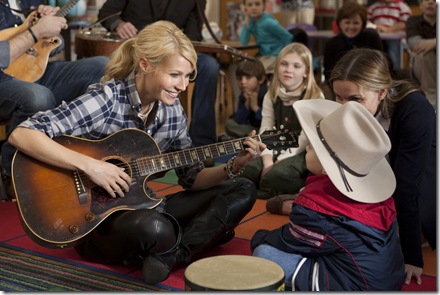 I’m not entirely sure that Country Strong omits any cliché from the plentiful pop/jazz/rock/country-artist-falls-from-grace-then-almost-magically rebounds films, but it certainly does try hard.

The film opens with Kelly Canter [Gwyneth Paltrow] in rehab, listening to Beau Hutton [Garrett Hedlund] trying out a new songs [with which she helps him] until her Husband/manager, James Canter [Tim McGraw] comes to get her out a month early to go back on the road. We learn, second hand, that Kelly fell ten feet of the stage in Dallas a year before – killing her unborn child and sporting a blood alcohol level of 0.19.

She introduces Beau to James as one of her sponsors – and tries to persuade James to let Beau open for her. James has someone else signed – a young woman named Chiles Stanton [Leighton Meester] – but does persuade Beau to join the tour, and after their first gig, the press are calling him the next Townes Van Zandt [whose music you really should seek out immediately] and her the next Carrie Underwood. Kelly mixes meds and booze and melts down onstage – then completely misses the next show, while Beau and Chiles make their performances and begin to accumulate an amazing number of fans. Finally, the return to Dallas comes up…

Writer/director Shana Feste set out to do something more with fading, challenged superstar film and – at least as far as the music goes – is partially successful. Garrett Hedlund could give Brad Paisley a run for his money and especially shines on Timing Is Everything [the song he and Kelly were working on before James liberated her early to make some money – James is, no doubt about it, a bit of an asshat] 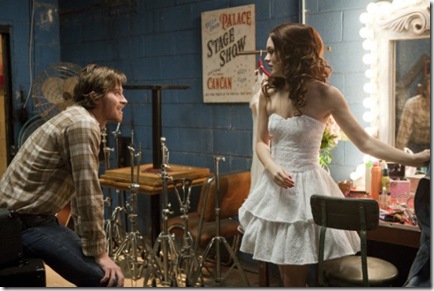 There are two triangles here – just to keep the clichés coming: Beau, Kelly and James; and Beau Chiles and James- the first at the beginning of the movie; the second developing from the moment Beau helps Chiles get over her stage fright. There’s also the whole ‘the stars ride on the bus; the openers ride in station wagons of vans – but both Beau and Chiles shuttle back and forth between, depending on demands of the story. Because she lost her baby in D

There’s even a scene where Kelly visits Travis, child who is suffering from leukemia. It’s the single sweetest moment, with Kelly improving a song for Travis that leads to everyone dancing. The, as if to see, see how clichéd we’re not being, we left the scene just trail into the ether…

Then, in Dallas, someone thought it would be fun to send her a gift – a paint-stained doll with the words “baby killer” on it.

Frankly, I was not overly impressed by any non-musical part of this film. Among the main cast, it was easily the biggest waste of talent since Clash of the Titans. More scenes just trailed off than continued any resolution and the only reason Beau, Chiles and Kelly are memorable, is that they can really their own singing [check out the closing credits].

Last year, one critic put forth the theory that Cop Out looked a collection of outtakes from a much funnier film. Outside of onstage moments, Country Strong could be a collection clichés taken from every movie ever made about rock/pop/jazz/country singers struggles to overcome their problems/addictions and storm back to make it big again. And who had the master stroke to put Tim McGraw in the film and not let him sing. And will that person be sent to mail room to start over again, from the lowest entry point into the industry? Probably not – after all, the music is damn good all by itself.