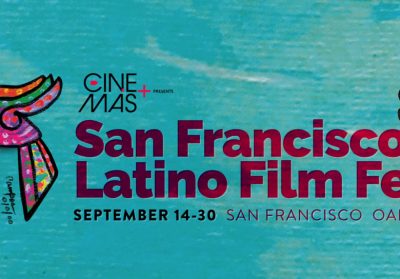 SFLFF opens this edition of the festival with
Ruben Blades Is Not My Name,
Bay Area premiere,
directed by Abner Benaim. Latin American icon Ruben Blades was at the center of the New York Salsa revolution in the 1970s. His socially charged lyrics and explosive rhythms brought Salsa music to an international audience. Blades has won 17 Grammys, acted in Hollywood, earned a law degree from Harvard and even ran for President of his native Panama. He lives in New York, where he shares his life at home and on tour with the camera. Critically acclaimed director Abner Benaim takes us on a journey through Ruben’s 50 year career, revealing that Ruben might still have both musical and political ambitions. The film is a celebration of this living
legend and his struggle to come to terms with his legacy.

music documentary, Indestructible: The Soul of Salsa (Spain)
dir. David Pareja. Seen through the eyes of el Cigala, this beautifully bewitching musical odyssey takes us from Madrid to various places all over the Americas in search of the sundry sources of that divine tradition we call salsa. A homage to the history of the musical culture and to his wife, Amparo, (who died of breast cancer in August 2015). It was Amparo, the dancer’s wife, who flooded him with enthusiasm to embark on this new adventure. Amparo is more present than ever in the Cuban rhythms and in the hearts of who have believed, like Diego, that salsa is a “gift for everyone, not just for Latinos “.

The festival includes a full array of shorts with several local filmmakers including :
Encuentros (USA/San Francisco) dir. Naomi Garcia Pasmanick.
Created by San Francisco natives in the watery edges of a city that is rapidly changing, this film intends to capture an intimate moment—the brief yet profound spiritual connection between two strangers– as well as this unique moment in an industrial San Francisco setting that is rapidly being developed. Just like the ever-changing water’s edge, Encuentros asks us to appreciate the beauty of an instant as well as the necessity of letting it go.

The SFLFF will close out with a fun mockumentary, Get the Weed (Uruguay)
dir’s. Denny Brechner, Alfonso Guerrero. Their first feature film — a fake “Uruguayan Chamber of Legal Marijuana” travels to the United States to find 50 tons of cannabis to supply the country. President Jose Mujica is the leader of the mission.

Hilarious while also subversively poignant mockumentary Get the Weed comes from Uruguay, the South American country that actually legalized weed years ago (true story) but then didn’t have enough of it to give out (also true story). So their farmer rebel-turned-president (who willingly stars in this film, true story) enlists two of his comrades to go get some from the United States (not true story).

Companies or individuals interested in supporting as sponsors or volunteers are encouraged to contact us at 415-754-9580 or cinemassf (at) gmail (dot) com.

About SFLFF
SFLFF is a volunteer run and produced program. Its mission is to showcase and promote, the work of emerging and established filmmakers from the US, Latin America, and the Iberian Peninsula; increase cultural opportunities for the Latino community, as well as create a cultural dialogue among Latinos and non-Latinos to discuss universal cross-cultural experiences. For additional program information please visit www.sflatinofilmfestival.org or call 415-754-9580. Join us on Twitter @SFLatinoFilm, Facebook @LatinoFilmFestival or Instagram @SFLatinoFilm