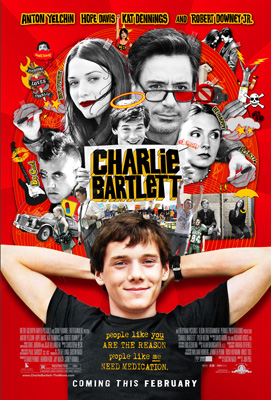 The trailer for Charlie Bartlett revolves, mostly, around the application of prescription to elicit humor. If the film had been solely about that, it would likely have been just as entertaining, but it would have been a one-trick pony. Fortunately, it is both smarter and wiser than that.

Charlie Bartlett [Anton Yelchin] has been expelled from every private school imaginable, for various offences – but this time, after being caught in a phoney ID enterprise, there are no private schools left that will take him. So, it’s off to public school where in his first day, he’s mistaken for a teacher and beaten up by Murphy [Tyler Hilton, who has talent, so maybe he’s not related…] the school bully.

After being prescribed with Ritalin® – to see if he has ADD [the theory being that if his concentration improves after using the Ritalin®, then he’s got ADD] – he goes on a four day, hyperactive high. When he comes down, he realizes that he has an opportunity and enlists Murphy as a business partner to sell the pills at the school dance for ten bucks a pop. It takes about twenty minutes to sell them all and hijinx ensue.

And here’s where the film makes its choice not to be just about pill-popping kids having a good time until something goes horribly wrong [though it does maintain that arc as well a few others – all smartly done]. When Charlie is approached by school loser, Kip Cromwell [Mark Rendall], he decides to try to help and uses Kip’s symptoms to get a prescription to help alleviate panic attacks. 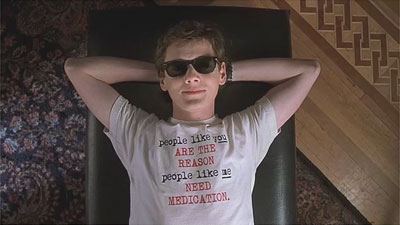 Charlie isn’t entirely altruistic though – he does charge for the prescriptions he doles out. What differentiates this kind of business enterprise from the usual pusher, is that Charlie actually listens to the kids he’s trying to help [when it seems that no one else is, including parents and teachers]. He keeps this up until something does horribly wrong – but when he announces that he will no longer be dispensing drugs – but will still be willing to listen, should anyone need to talk about something.

This is where we learn that Charlie’s fellow students don’t just think of him as the guy who got them drugs, but rather, as the guy who actually listened to them and tried to help. Naturally, just when Charlie is being liked for himself, things fall apart for him on the teacher/student level due to a series of events that begin when security cameras are installed in the one place that the students have to just hang.

There’s a romance, of course – between Charlie and Susan [Kat Dennings], the principal’s daughter – which adds to Charlie’s problems because the principal, Mr. Gardner [Robert Downey Jr.] is a bit of an ass and an alcoholic, to boot.

And we haven’t even gotten into the complex relationship between Charlie and his mother, Marilyn [Hope Davis, who never seems to give anything less than a superb performance]. She’s treated like an adult for his entire life – and unwittingly made it nigh unto impossible for him to be the kid that he is – and that’s just for starters! 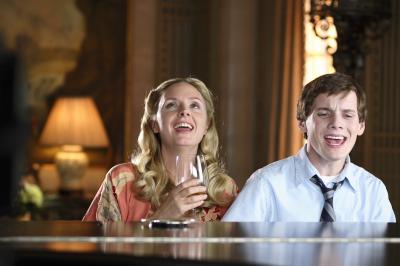 Charlie Bartlett, the film, is a smart film that sucks us into thinking it’s a teen comedy romp [though a smart one] before it lowers the boom dramatically and pulls dramatically emotional notes from every comic setup. Although some bad things come from some of Charlie’s actions, much more good comes from them – especially after he decides that just listening is the best possible course of action for him. Just by listening, for example, he learns that the suicidal student has been writing a play – a pretty good one, too. Just by listening, he learns that Murphy has more to him than a hair-trigger temper and thunder in his fist. Just by listening, he learns that the popular cheerleader has achieved that popularity in an unfortunate manner.

Because he actually listens, even without the drugs, he is genuinely able to help them. As a result, he more than makes up for those actions that have bad repercussions. So, even though there are some pretty bad things that happen – some of which are not directly attributable to him – he is willing to put himself out there for his friends and take responsibility.

In the end, even Principal Gardner benefits from Charlie’s efforts to help – in a completely unexpected way. At the beginning of Charlie Bartlett, Charlie tells the family shrink that he has this particular, specific fantasy. In a strange way, he gets to live his fantasy not once, but three times – all with important results; all with what might be called grace under pressure. 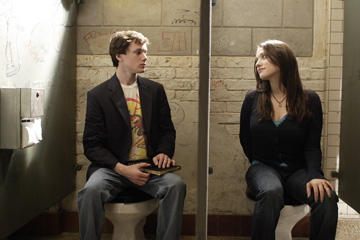 Anton Yelchin is probably best known for playing Byrd Huffstodt in the Showtime series, Huff. To the casual observer, the role of Charlie Bartlett might seem very similar: Byrd’s dad is psychiatrist – Charlie’s family has a psychiatrist on call; Byrd is world weary and wise beyond his years – Charlie is, too;  both Byrd and Charlie are highly articulate – to the point where neither has many friends; both are capable of getting bullies off their backs through devious means; Byrd’s parents have separated, as have Charlie’s – though for different reasons.

The one thing that separates them – and ultimately makes Charlie a character worth talking about – is that Byrd has begun to behave in a self-destructive manner, while Charlie sincerely wants to make things better – for his not quite all there mother; for the daughter of the alcoholic school principal; for the students of his school – including the aforementioned bully, and for himself.

It is Yelchin’s ability to play a character who is smarter and wiser than his years that connects the two – and is his ability remain a kid [he’s only a year older than Charlie] that makes Charlie Bartlett, both the character and the movie, work. It’s an impressive performance in a crowd of impressive performances – but it’s the one at the heart of the movie, and it’s that heart that makes the smart and wise Charlie Bartlett the guy who really listens and a film that reaches its audience on both the intellectual and emotional levels.

3 thoughts on “Charlie Bartlett: Would You Like to Talk About It?”