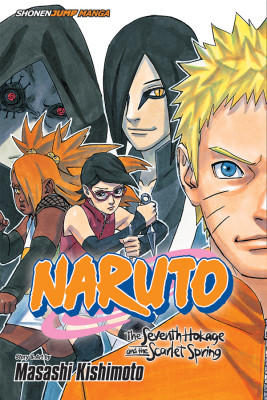 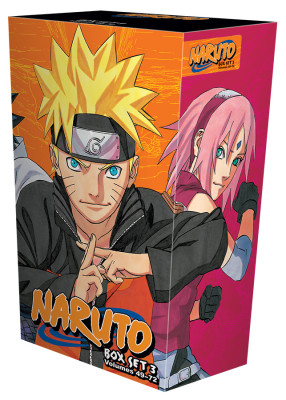 Set for release in print on January 5th, NARUTO: THE SEVENTH HOKAGE AND THE SCARLET SPRING is the post-series spin-off to the world’s most popular ninja manga. A digital version is currently available via VIZManga.com and the VIZ Manga App, as well as from the Nook, Kobo, Kindle, iBooks, comiXology, and GooglePlay stores. Also set for release on January 5th will be the NARUTO Manga Box Set 3, which contains the thrilling concluding story arcs to the worldwide smash hit manga (graphic novel) series. Also included is an exclusive double-sided poster and a bonus booklet featuring a special NARUTO story and an interview with series creator Masashi Kishimoto. Both releases are rated “T” for Teen.

NARUTO: THE SEVENTH HOKAGE AND THE SCARLET SPRING

In the years since the great ninja war, peace has bloomed in the ninja world, and a new generation has begun to take root. Naruto’s work as Hokage seems to be pretty mundane, but his son, Boruto, is constantly demanding attention. Luckily for Naruto, he can make clones of himself to babysit his son. But Sasuke’s daughter, Sarada, could be the target of a mysterious figure who has connections to the Uchiha clan!

The third and final NARUTO Box Set contains the thrilling conclusion to one of the most popular manga series of all time. The set features Volumes 49-72 at a substantial savings over buying them individually, along with exclusive premiums.

Manga author/artist Masashi Kishimoto was born in 1974 in rural Okayama Prefecture, Japan. Like many kids, he was first inspired to become a manga artist in elementary school when he read DRAGON BALL. After spending time in art school, he won the Hop Step Award for new manga artists with his story, Karakuri. After considering various genres for his next project, Kishimoto decided on a story steeped in traditional Japanese culture. His first version of NARUTO, drawn in 1997, was a one-shot story about fox spirits; his final version, which debuted in Japan in Weekly Shonen Jump in 1999, quickly became the most popular ninja manga in the world. The series would also spawn multiple anime series, movies, novels, video games and more. Having concluded the series in late 2014, Masashi Kishimoto has kept himself busy this year with the side story, NARUTO: THE SEVENTH HOKAGE AND THE SCARLET SPRING, and writing the story for the latest NARUTO movie, Boruto: Naruto the Movie, both of which focus on the title character’s son, Boruto.

VIZ Media is the North American master licensor for NARUTO and publishes the bestselling NARUTO manga series in print and digitally and also distributes the NARUTO and NARUTO SHIPPUDEN anime series and feature films. Additional information on NARUTO is available at www.Naruto.com.