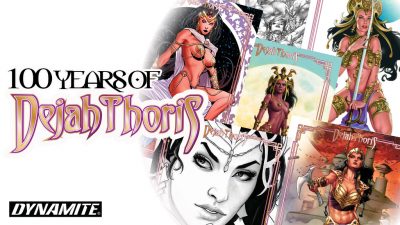 Dynamite Entertainment announces a fun new Kickstarter campaign for the 100 Years of Dejah Thoris Deluxe Trading Cards. Check out the Kickstarter to score unbeatable, advance deals on these packs which include one-of-a-kind sketch cards and other rewards like graphic novels. 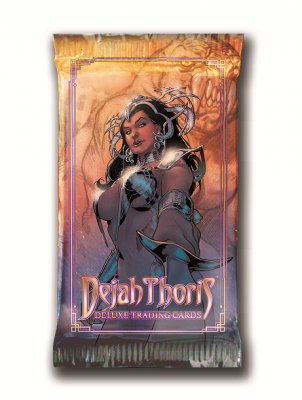 November 20, Mt. Laurel, NJ: Dynamite Entertainment announces a fun new Kickstarter campaign for the 100 Years of Dejah Thoris Deluxe Trading Cards. Check out the Kickstarter to score unbeatable, advance deals on these packs which include one-of-a-kind sketch cards and other rewards like graphic novels.

Whether she’s portrayed as a damsel in distress or a fierce and capable warrior in her own right, Dejah Thoris always looks fantastic. This highly collectible set features the cream of the crop of artists and their portrayals of the Princess of Mars. Including luminaries Joe Jusko, Joseph Michael Linsner, Jae Lee, David Finch and Mel Rubi.

Each foil pack includes 7 total cards split up between high quality full color base cards, sketch cards, black and white line art cards, puzzle cards and signature cards. These deluxe packs will eventually retail for upwards of $100, but are available now on Kickstarter for only $65 (without even counting all the bonuses available).

Supporters can choose among a range of other reward tier options, including a selection of Dynamite’s critically acclaimed Dejah Thoris graphic novels and the beautiful 288 page Art of Dejah Thoris book. Request your own specific backing tier with the combo you want. Or go big and get all the above!

Edgar Rice Burroughs contributed an incomparable oeuvre to popular fiction across his Barsoom saga and other works. The central characters of John Carter, Dejah Thoris and their family have entertained and inspired across generations. Dynamite is proud to have woven our own threads into that fabric with nearly a decade of fan favorite comics starring John and Dejah. Including the just concluded Dejah Thoris from writer Amy Chu and artist Pasquale Qualano and the upcoming Barbarella/Dejah Thoris from Leah Williams and Germán García.

“Dejah Thoris is one of the most iconic female characters in the world and has stood the test of time, a testament to Edgar Rice Burrough’s storytelling as she is still around over 100 years later. That’s a monumental milestone that blows past the legends of our industry and Dynamite is proud to continue that legacy,” said Nick Barrucci, CEO/Publisher of Dynamite. “Fans are going to love these cards, featuring some of the best artists we have worked with over the years. Plus the one-of-a-kind sketch cards are the ultimate collectible for Dejah fans.”

This Kickstarter campaign is only available for a limited time, so don’t miss it!