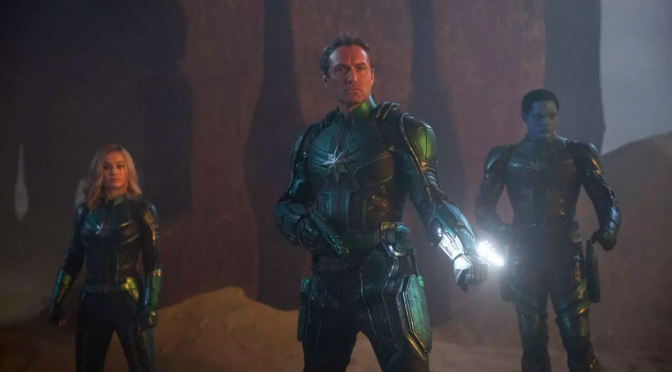 One of the more interesting aspects of Captain Marvel is that the title character actually gets two origins – one for her Kree warrior, Vers (rhymes with fierce), and one for the titular cosmic superhero.

We’ll get to that in a moment, but first, let’s look at an aspect of several Marvel movies – the ability to Say Stuff without, for a moment, sacrificing the kind of fun we expect to have watching a superhero movie.

Just by existing, Captain Marvel puts women at the forefront: from the titular character and her best Terran friend to the co-director and two co-writers; from the various crafts people to the film’s composer (Pinar Toprak), women play a huge role in the making of the film.

In what might seem like a throwaway line, Maria Rambeau (Lashana Lynch) notes that she and Carol Danvers work as test pilots because ‘they don’t let women fly combat missions,’ Captain Marvel takes a stand: nobody will ever tell Captain Marvel she can’t fly a combat mission again – and, for a film set in 1995, that’s a big deal.

The film also makes the point that an invention sought by the oh so masculine Yon-Rogg on behalf of the Kree Empire was invented by a woman – and that the A.I. Supreme Intelligence appears to Vers as a woman (an important person in her life, if she could only remember).

So, there’s stuff being said throughout – just in a way that flies just enough under the radar that the film’s overriding mission – to provide a fun moviegoing experience – is not compromised.

Another intriguing aspect about Captain Marvel is that it opens on Hala the Kree homeworld – where Vers (Brie Larson) is being trained to be a warrior by the aforementioned Yon-Rogg (Jude Law).

His/the Kree philosophy is that emotions get in the way of warriors being their best selves.

This leads to Vers’ first encounter with the Supreme Intelligence (Annette Bening) and being assigned her first mission – to rescue a Kree spy from a world held by Skrulls – the shapeshifting aliens with whom the Kree are at war.

This leads to Vers learning she has even more power than originally thought – the source of which is revealed at a key point in the film and helps discover who she really is.

Once Vers gets to Earth (crashing through the roof of a Blockbuster video store – and having a fatal confrontation with a promotional standee), Captain Marvel shifts into high gear by bringing in S.H.I.E.L.D.

Enter Agents Nicholas Joseph Fury (Samuel L. Jackson) and Phil Coulson (Clark Gregg) – CGI de-aged so well that it’s not at all distracting once we get past the initial shock.

The Skrulls – a very popular set of Marvel bad guys – are omnipresent: Fury has a very unexpected encounter with not one by two! One of them his boss, an Agent Keller aka General Talos (Ben Mendelsohn) – who definitely seems to be up to no good.

Of course, because this is a movie, Captain Marvel also has to tie in with Avengers: Infinity Wars and Avengers: End Game (yes, we learn how Fury got that souped up pager).

Captain Marvel is near as joyful as Wonder Woman or as complicated as Avengers: Infinity War, but it is surprisingly witty and provides Marvel’s greatest cosmic hero with a suitably complex background.

The wonders of technology department: even a few years ago Marvel couldn’t have hoped to do the Skrulls justice. Today, the lizard green aliens with ridged jaws and pointy ears look so natural, they look like they could step off the screen and into the real world without any problem (the sparking of riots of terrified Terrans aside).

It’s perhaps fitting that the Skrulls seem to be more developed than the Kree – they’ve been around a lot longer (first appearing in Fantastic Four #2 way back in 1962).

There are moments when Captain Marvel revels in comic book goofiness – the scene in which Carol Danvers creates her suit’s new look, for example – and reminds us that the primary purpose of this (and any) superhero movie is to provide a fun experience.

There are moments of deadly seriousness, too – war is never to be taken lightly, f’rinstance – but there are also moments of wit that come out of nowhere (the best of a very good lot actually comes in the film’s second tag, at the very end of the closing credits).

Directors Anna Boden and Ryan Fleck (who also co-wrote with Geneva Robertson-Dworet) have taken their knack for small scale character study and peculiar situations and brought a unique intimacy to Captain Marvel – the most cosmic character in Marvel’s current pantheon of heroes.

Go see this movie. You will not regret it.