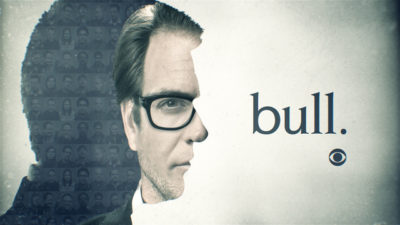 The premiere is typical of a CBS procedural in that it’s technically well made; it’s well designed, and Bull’s team is diverse and super competent. The plot takes a few turns that are pretty straightforward, but it’s not until the last minute when the truth comes out. At that point, I decided that Bull deserves a few more episodes – it’s just different enough to bear further investigation.

The main selling point here is the procedural aspect of the show which takes elements of CBS series Shark (the idea of researching jurists and crafting a criminal case specifically to them) and Dr. McGraw’s early career and elaborates on it with the latest high tech gizmos and an older version of a CW-pretty cast.

Most of the characters get a moment to shine, but obviously Dr. Bull gets the lion’s share of initial development and it’s hard to see Weatherly’s character evolve into the pompous, self-aggrandised merchant of pop psychology we all know and love/hate – which is good for the show.