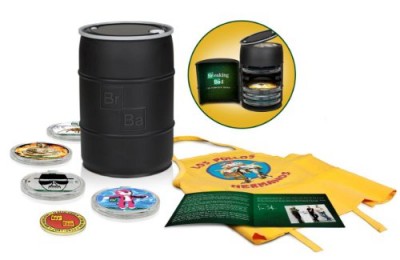 Somehow the entire Breaking Bad phenomena escaped me so I’m really looking forward to catching the Breaking Bad: The Complete Series Blu-ray. Sony Home Video has put together a pretty amazing sounding package that includes over 55 HOURs of extras and the set even comes with a digital copy of the full series.  That ain’t bad.  The full press release is after the break.

Sony Pictures Home Entertainment cooks up a full batch on Nov. 26 when BREAKING BAD: THE COMPLETE SERIES comes to Blu-ray™ in its entirety. One of the most explosive series ever to air on television, the 16-disc set is this year’s must-have gift for the holiday season, complete with all 62 episodes and more than 55 hours of special features.

Fans who are addicted to the series and itching for another hit can now indulge in more than two-hours of never-before-seen footage in a ground-breaking series documentary exclusively in the box set, which comes packaged in a collectible replica barrel representing part of Walter White’s dark legacy.  The all-new documentary chronicles the making of the final season, from filming the first table read to the very last day on set and everything in between, including Bryan Cranston inviting the camera in to his Albuquerque living room for the first reading of the final script with Aaron Paul.

The box set also contains all bonus features from previously released seasons (including retail exclusives formerly only available in select stores), a Los Pollos Hermanos apron and a collectible booklet with a letter from Gilligan, as well as a commemorative Breaking Bad challenge coin designed and created by Gilligan exclusively for this set as a token of appreciation to fans for making the Breaking Bad journey.