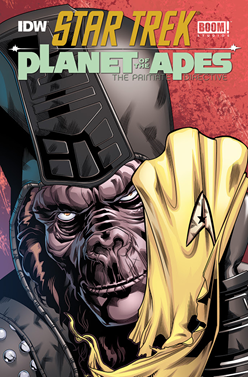 BOOM! Studios and IDW have announced that they will partner for an epic sci-fi crossover – Star Trek/Planet of the Apes. The crossover would involve the crew of the original U.S.S. Enterprise and the characters from the original Planet of the Apes movie. The plot would have Klingons backing a renegade gorilla takeover of Ape City and Captain Kirk having to team up with Dr. Zaius’ orangutans in an effort to prevent it.

San Diego, CA (July 25, 2014) – Have you ever wondered what it would be like to “mind-meld” with a sentient ape? Or wanted to see a Klingon on horseback, brandishing a rifle? Readers will soon have a chance to peek into just such an alternate future, as IDW Publishing partners with BOOM! Studios for the crossover event of the year: Star Trek/Planet of the Apes.

IDW will publish the crossover, which will mark the first time BOOM! Studios has partnered with another publisher on a series. Together they will bring Star Trek, licensed by CBS Consumer Products, and 20th Century Fox’s Planet of the Apes together in a way that is sure to delight existing fans and make new ones. The series will pair the original U.S.S. Enterprise crew with Taylor, Nova and the cast from the original Planet of the Apes film.

“Planet of the Apes and Star Trek are groundbreaking science-fiction properties and both deal with many of the same social issues and themes,” says Greg Goldstein IDW President & Chief Operating Officer. “A crossover between the two is a natural and long overdue.”

“Before I could read comic books as a child, I could watch science fiction on my television. My dad used to wake me up way past my bedtime to watch Star Trek in syndication—it came on after the nightly news—and I took a Planet of the Apes lunchbox with me to kindergarten every day,” says BOOM! Studios Founder and CEO Ross Richie. “Suffice to say, teaming up these two titans of science fiction on the page in a way that they probably will never meet each other on the silver screen is a huge moment for me personally and emotionally.”

The creative team will be a mix of proven experience and new blood with scripts by beloved Star Trek scribes Scott and David Tipton (Star Trek: The Next Generation/Doctor Who: Assimilation 2) and interior art and covers by the British newcomer Rachael Stott.

“With the Klingons secretly backing a renegade gorilla general in a coup for control of Ape City, Captain Kirk finds himself in the uncomfortable position of having to help out Dr. Zaius’ orangutans,” explains David Tipton. “Taylor won’t be happy with that!”

“What an epic pairing! I’m so excited to see Taylor, Kirk…and those damned dirty apes…in our upcoming comic,” says IDW editor Sarah Gaydos, “We’re eager to team up these exciting creative forces to bring this to life.”

About IDW Publishing
IDW is an award-winning publisher of comic books, graphic novels and trade paperbacks, based in San Diego, California. Renowned for its diverse catalog of licensed and independent titles, IDW publishes some of the most successful and popular titles in the industry, including: Hasbro’s The TRANSFORMERS, G.I. JOE and MY LITTLE PONY; Paramount’s Star Trek; Nickelodeon’s Teenage Mutant Ninja Turtles; 2000AD’s Judge Dredd; The Rocketeer; Toho’s Godzilla; Wizards of the Coast’s Magic: The Gathering and Dungeons & Dragons; V-Wars from New York Times best-selling author Jonathan Maberry; Ragnarök from Eisner Award-winner Walter Simonson; Winterworld, created by Chuck Dixon and Jorge Zaffino; and Little Nemo from the award-winning duo of Eric Shanower and Gabriel Rodriguez. IDW is also home to the Library of American Comics imprint, which publishes classic comic reprints, Yoe! Books, a partnership with Yoe! Studio, and the multiple award-winning Artist’s Edition imprint.

IDW’s critically- and fan-acclaimed series are continually moving into new mediums. Currently, Jerry Bruckheimer Films and Disney are creating a feature film based on World War Robot; Dwayne "The Rock" Johnson and Warner Brothers are producing a film based on Ashley Wood’s Lore; Michael Bay‘s Platinum Dunes and Sony are bringing Zombies vs. Robots to film, Kurtzman/Orci are producing a movie based on Locke & Key at Universal.