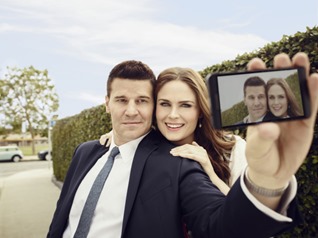 Fox has given Bones an order for a tenth season. But that’s not all – after this Friday’s episode, The Heiress in the Hill, the series will return to Monday nights with new episodes beginning March 10th (8/7C).

In other scheduling news from Fox: Kitchen Nightmare returns with a new episode on Friday as Gordon ‘I’M LOUDER THAN YOU’ Ramsay returns to Amy’s Baking Company, and the first season finale of Almost Human will run on Monday, March 3rd (8/7C). Check out the press release after the jump.

FOX has picked up a 10th season of BONES, it was announced today by Kevin Reilly, Chairman of Entertainment, Fox Broadcasting Company. In addition, after airing a new installment this Friday, Jan. 31 (8:00-9:00 PM ET/PT), BONES will return to Mondays, with all-new cases, beginning March 10 (8:00-9:00 PM ET/PT).

“Over the course of nine seasons, BONES has grown from a hit crime procedural into a beloved pillar of our lineup that resonates with fans in a way that only the best of shows can,” said Reilly. “Our viewers have embraced Emily, David and the entire cast and characters of BONES as their very own, and I think they are going to love what Hart Hanson and Stephen Nathan have planned for Season 10!”

In this Friday’s (8:00-9:00 PM ET/PT) all-new episode of BONES, “The Heiress in the Hill,” the Jeffersonian team investigates the murder of a kidnap victim whose remains were found buried at a park.

BONES is from Far Field Productions and Josephson Entertainment in association with 20th Century Fox Television. The series was created by Hart Hanson. Hanson, Barry Josephson, Stephen Nathan, Ian Toynton and Jonathan Collier are executive producers. “Like” BONES on Facebook at facebook.com/Bones. Follow the series on Twitter @BONESonFOX and join the discussion using #bones. See photos and videos on Instagram by following @bonesfox. Download the BONES Companion app at fox.com/bones/mobileapps.

KITCHEN NIGHTMARES is a co-production of ITV Studios America and Optomen in association with A. Smith & Co. Productions. Arthur Smith, Kent Weed, Patricia Llewellyn, Gordon Ramsay and Lindsay Kugler serve as executive producers. “Like” KITCHEN NIGHTMARES on Facebook at facebook.com/KitchenNightmares. Follow the series on Twitter @KNonFOX and join the discussion using #kitchennightmares.

ALMOST HUMAN is produced by Bonanza Productions Inc., in association with Bad Robot Productions and Warner Bros. Television. The series was created by J.H. Wyman, who wrote the pilot. The series is executive-produced by J.J. Abrams, Wyman and Bryan Burk. Kathy Lingg (“Person of Interest,” “Revolution,” “Fringe”) and Reid Shane (“Fringe”) are co-executive producers. Brad Anderson (“Fringe,” “The Killing”) directed and served as co-executive producer on the pilot. “Like” ALMOST HUMAN on Facebook at Facebook.com/AlmostHumanFOX. Follow the series on Twitter @AlmostHumanFOX and join the discussion using #almosthuman. See photos and videos on Instagram by following @AlmostHumanFOX.

Photo by Jeff Lipsky/Courtesy of Fox