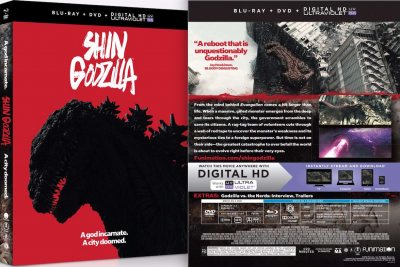 Shin Godzilla – which opens in over 400 theaters for an eight-day run beginning Tuesday, October 11th – is the 29th in the franchise’s 32 year history.

Unlike all but the first few films in the franchise, this Godzilla is not campy – Godzilla is not Japan’s champion. Instead, it’s a destructive force of nature that, like the original, echoes the dangers of the atom. This time, though, it’s not atom bombs, but the nuclear disaster at Fukushima – and its subsequent fallout – that are being obliquely referenced.

Like Gojira/Godzilla, the first film in the series, Shin Godzilla opens on a single boat – this time, though, it is deserted. Inside, on a table, are a large envelope and one piece of origami.

Suddenly the boat is rocked by an eruption of water and we cut to an outside shot showing a plume of water arising from a mass of turbulence in the water surrounding the boat. Then we cut to a traffic tunnel suddenly springing a leak and tons of water cascading down on traffic.

Then we move to scenes with government officials trying to figure out what’s going and what to do; a huge gilled creature (with familiar spines down its back but otherwise not at all familiar) moving up a river – then back to the politicians and, finally, a press conference where the speaker goes off script seconds before what he says is proven utterly incorrect.

Before long, the creature changes – instant evolution – a couple of times and now is revealed as the Godzilla we all recognize.

Again, politicians meet and meet and meet, taking forever to decide what to do – even after Godzilla begins to wreak havoc on Tokyo. In between meetings, a young pol named Rando Yaguchi (Hiroki Hasegawa, Attack on Titan) wonders aloud why there must be so many meetings – even to schedule a press conference.

Yaguchi soon finds himself heading up a geek squad to see if they can figure out a way to deal with the giant lizard without having to deal with red tape.

Eventually, pressure from the U.S. brings Kayoco Ann Patterson (Satomi Ishihara, Attack on Titan) into play. She has intel that she shares with Yaguchi – the envelope we saw on the boat earlier – and we learn what the writer had called a potential such creature: Godzilla (though the Japanese characters used say ‘Gojira’).

This serves two purposes – it presents a possible origin for the creature (some sea creature dined on nuclear waste and evolved) and poked a bit of fun at the arguments between fans on whether Godzilla or Gojira is the correct name for the creature (it’s both guys!).

It also suggests that bureaucracy has its limits and sometimes red tape has to be cut.

From there it’s a race – to find a way to stop Godzilla/Gojira before it lays waste to the whole of Tokyo, and before U.S. pressure can convince the U.N. that the nuclear option is the only viable one.

Written and directed by Hideaki Anno (Neon Genesis Evangelion)/co-directed by VFX director Shinji Higuchi (The Floating Castle), Shin Godzilla is a mix of static scenes of bureaucracy in action/inaction; more frantic sequences of Yaguchi’s geek squad (later referred to as the Special Disaster Bureau) actually getting stuff done, and sequences of mass evacuations and armed attempts to take down Godzilla.

Even at its campiest, the Godzilla movies have always been less than reverent about government than most (in one, Japanese crowds exploded into laughter when the Big Guy trampled a building that housed Japan’s equivalent of the IRS, as just one example) and Shin Godzilla is no exception.

It’s not that it pictures Japanese politicians as buffoons, exactly, but more that they are hampered by all the rules and regulations and traditions that hamstring them (though there are one or two buffoons, there are also a few very capable pols here – not the least of which is Yaguchi).

The sequences with Godzilla’s destruction and fleeing Tokyo citizens are more realistic and emotionally impactful than in many of the films since the original – the tone definitely builds audience tension and concern, while the futile attempts of Japans’ Self Defense Forces to stop the monster add to the feeling that every aspect of Japanese life is on the verge of collapse.

In the end, it comes down to a race between the special Disaster Bureau/geek squad and the U.S.-backed decision to nuke Godzilla (and render the city of Tokyo forever unlivable) – and Anno and Higuchi stage these moments well.

Adding to the tension, Patterson refuses to evacuate with the rest of the Americans station in Japan to continue working with Yaguchi because she doesn’t want to see her grandmother’s country suffer a third nuclear bomb.

In a positive twist, Patterson and Yaguchi do not fall in love/hook up – though their political ambitions could certainly see them working together again. Another positive twist is that scientist who first theorizes Godzilla feeds nuclear power is a woman – after being derided, when it turns out she’s right, she is offered an apology!

Shin Godzilla’s biggest flaw is, perhaps, Anno’s overemphasis on the government’s being hamstrung by its own rules, regulations and traditions (and the idea of saving face in front of the international community of the U.N.).

Even with the humor in seeing government officials hurrying from one meeting to set up another to set up another and then heading off to that that meeting, some of those scenes could easily have been trimmed without losing the satirical point he’s making (again, guys, Fukushima!). Even some of the scenes with the geek squad could have been shorter.

The bits concerning the pushy Americans, unlike the rest of the political stuff, are not pushed too hard – just enough to make a point for the purpose of the story.

This Godzilla has a few surprises in regard to the Big Guy, too, that require some thinking outside the box to stop him – and the effects work is superb for the most part (the early iteration of the big lizard is a bit wonky, but that could be a subtle call back to some of the franchise’s less expensive effects work – if not an actual homage).

As it is, Shin Godzilla is still a heartbeat under two hours, so it’s not like it badly overstays its welcome. It’s not quite as good as the first film (an absolute masterwork) or as much pure fun as some of the ‘60s and ‘70s efforts, but it is very entertaining and well worth seeing.

The Blu-ray’s only bonus feature (trailers are not a bonus feature!) is Godzilla vs. Nerds – Interview, a weird  – but curiously informative discussion of the movie by three Funimation employees/Godzilla fans and the guy who draws the Godzilla comics for IDW.